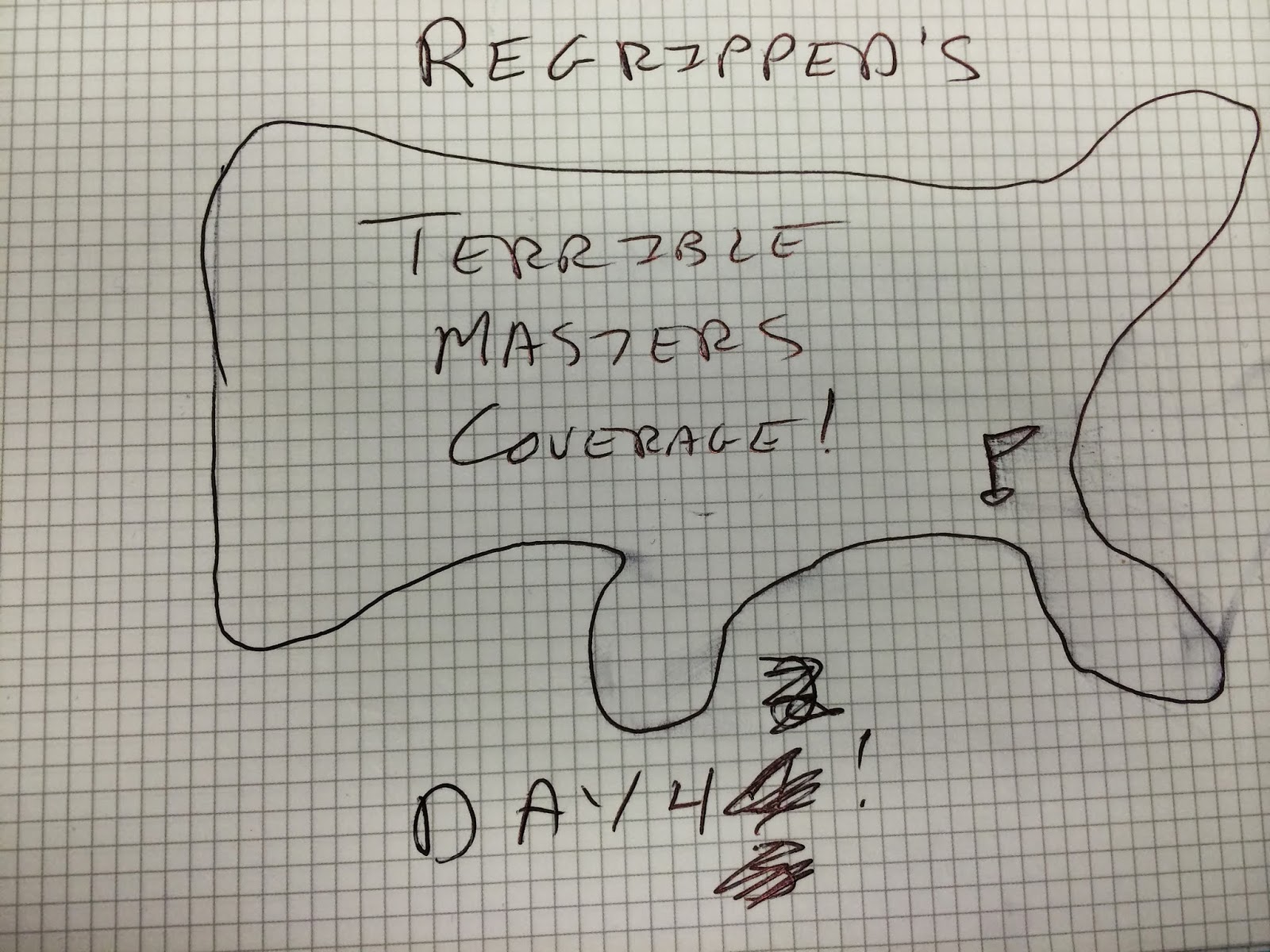 Here we go, the final day, for all the marbles. Who is going to take it?

8:30am: Great interview with Jordan Spieth. Seems like a level-headed guy who has big things ahead of him since he is only 20 and at the start of his career. We will see how he fares under the spotlight of the final group. An old chestnut states that the tournament doesn't begin until the back 9 on Sunday and I think that is going to hold true here.

9:15am: Finally! We get off the practice green and following a group. Yes that is a greedy statement to make but there have been groups on the course for hours, why not stream it for the psychos like me? The first featured groups involves a guy who is plus 7 and another who is plus 5. The plus 7 guy sliced it right off of 10 into the trees and the plus 5 guy hooked it left into the other trees. I hate watching the practice range so much that I am glad to be watching this display at the moment.

10:30am: The featured groups are really hacking it up out there on the course. They look like me! Instead of following this action with rapt attention, I headed over to Golf Digest's live chat with Dan Jenkins, a living legend who wrote great articles when I was first playing the game and continues to do so now. Check out the chat recap here.

11:00am: And we get to CBS coverage. With the streaming and ESPN coverage, I forget how sugary sweet the CBS coverage is. It has to be that way to some extent but I think Nantz is losing it a bit (especially with an hour lead-in special which was all about him and Augusta and horrible). Just get me to the golf is what I say!

12:30pm Freddie is giving me a heart attack. 2 birdies so far, a 40 foot made putt for par, just missing a must make birdie. This is intense for such a low intensity sport. Meanwhile, Spieth is playing well, scrambling a bit due to his poor driving but is leading while Bubba and Kuchar drop off the lead. Of course, just as I type this, Spieth lands in a bunker and then HOLES OUT FOR A BIRIDIE. It is his day, no question.

1:45pm: It sure looks like it is a 2 horse race between Watson and Spieth. Sadly Spieth is losing shots left and right but considering yesterday, I don't put it past Bubba having a meltdown as well. Fred is having a meltdown on the back 9 as well. Poor Fred, that Saturday sunk him and just couldn't make up enough ground on Sunday.

3:25pm: Fowler and Jimenez finish up. They both had the game to make a move today and didn't but they were entertaining nonetheless. Golf needs more of these guys, too much of it is stiff shirted corporate golfers with zero discernible personality. The knock on Spieth is that he is a hot head but so what, at least he let's the mics know he is unhappy with the shot. Kuchar has a nice smile but I know nothing about him. Golf needs to make me care about these guys more.

4:00pm: And that is it, a guy named Bubba is your Masters champion for the second time. As I have said before, I am conflicted about Bubba due to his twitter-stand on gay rights issues but you can't be conflicted about how well he played and how poorly everyone else played. Spieth faded, Freddie faded and Kuchar/Fowler/et al couldn't make the charges needed. Soon I am sure we will be seeing this taking place in Augusta Georgia.

Overall, this was a great tournament to get back my serious interest about golf. The course is classic, the names are known while the results aren't. I had fun live blogging the last 4 days but I think its time to take a break from the wall-to-wall Masters coverage here at ReGripped, at least until next year!

They Will Make A Bad Disney Movie Based On Your Exploits:

McIllroy: Was flogging him all week but closing with a -3 round was great. I have no idea what he is going to do on any given day/week and today was no different.

Blixt: I have no idea who this guy is but he had a great tournament and hung tough all day. He couldn't buy a putt but he might be a real factor in the years to come.

C'mere I Need To Seal An Envelope With You:

Weir: I love this guy, great golfer, seems like a good guy, former Masters winner. That being said, watching him hack around the golf course today wasn't pleasant to watch and while he didn't shoot as bad as his 79 yesterday, Mike not your best tournament.

Scott: Dude you killed my fantasy pool. Hot to trot the first few days, just like the last tourney you played then a drop off on the weekend. Please just take the top spot away from Eldrick already will ya?