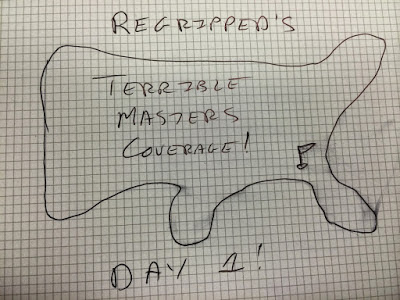 Here we go. I yet again did not win the Masters lottery so you get my thoughts live and direct from Southern California. Its Day 1! Will Dustin come back from an injury and compete at the tourney like some sort of 80s movie? Will Jordan become unstoppable? Tune into my live blog below!

Day 1 Recap:
DJ's back blew up on him. Jordan's back 9 blew up on him. The old guard of Lefty, Sergio and Freddie hung tough. Hoffman is blowing away everyone. Sullivan, Rose and Fitzpatrick are all on the front page.

I am a huge fan of Jon Rahm. I followed him at Torrey and became a believer and I noticed a pattern. This his is first full season on Tour and he is figuring things out. What this means practically is tgst his first round isn't so hot, his second is much better and then his weekend vaults him into the top 5 or even a win (as was the case at Torrey). Look for him to turn his plus 1 into something much better tomorrow.

See ya on the blog tomorrow!

3:15pm PST: I have never been to the Masters but do these late afternoon crowds look a little thinned out to you? If I were lucky enough yo get invited by someone (hint hint) or win the ticket lottery here would be my day:

6:15am stand in line at the gate. 7am fast walk (no running!) to the mech tent, but about 300 bones worth of stuff including a chair then stuff it all into a locker. The go place the chair on some hole in Amen Corner for later. 8am go follow whatever group is teeing off 1 and walk 18 holes. 12, gorge myself on peach ice cream sandwiches and beer. 1 go to my chair and sit for awhile. 4-7 wander the course till they kick me out.

What would you do?

2:40pm PST: "Rory has just never seemed in synch." Truer words Appcast, never spoken. I think Rory wants this too badly. Sure most professional golfers live and die by their results but Rory takes this green jacket stuff to another level. Multiple practice rounds, skipping the par 3 tourney (can't blame him too much on that) all of it resulting in not quite great performances and no career grand slams. I think he needs to let the slam go at this point mentally and he might just find himself winning it one of these years.

1:35pm PST: Sorry I signed off for a quick lunch break there. No, I did not have a pimento cheese sandwich. I actually looked for pimento cheese here in Los Angeles but couldn't find any. Guess I will just have to go to Georgia to get one in person!

The biggest news over the last hour is that McGirt (one of the craziest names in golf) is leading this thing. Not only that but he finished at 3 under! Not only that but the Euros have all fallen down the leaderboard with good old boys like Dufner and Chappell taking their place. Truly some craziness going on!

12:15pm PST: And just like that the golfers at Augusta prove me wrong by making birdies with several ties for the lead at -2. Coupled with Jordan making a birdie and you should ignore that last blog entry. Be that as it may, the course is still playing super tough and I don't expect scores to get much above -2.

What is also interesting is that you have 3 Euros in the top 4 spots at the moment. Willett was no fluke, the guys on the other side of the pond cone to play this course (also throw in Faldo and all the other amazing European players over the years of course).

11:45am PST: Just like that Jordan is tied for the lead. What is more fascinating is how much the field has fallen back to level par. Pieters went from -4 to -1 and people flirting with 2 or 3 under are back toward level. The Amen Corner announcers think someone can get to 2 or 3 under to end the day but I don't see it, especially with the wind picking up steam.

11:20am PST: In answer to my question above DJ has withdrawn from the Masters due to a back injury he incurred when falling down the stairs last night. DJ was the favorite of many a golf fan heading into this week having won his last 3 starts but the back is the number one thing you need healthy as a golfer so it's no go for him. Interesting to see how long he will be outvfor with this as he is surely the favorite for the US Open in a few months at Erin Hills.

11:05am PST: Aaaaaand Jordan is safely on the 12th with his tee shot hopefully putting to rest the questions stemming from last year's Masters.

One of the reasons I like The Open so much is due to the weather and I like playing in blustery conditions. It is great to see the shadows of clouds move across the fairways and the trees rustling. Now I REALLY wish I was there in a day like today!

10:15am PST: Well it looks like half of my fantasy golf picks are already flaming out so I am switching from the featured group coverage to Amen Corner. The PGA and the rest of the Tours could really learn a thing or two about how Augusta runs its App and website. Multiple options for multiple viewers.

Another thing they do right? Having the hand operated scoreboard be the scoreboard for their website, love it!

9:35am PST: Looking at the first page of the leaderboard, a lot of the leaders have gone out early. It will be interesting to see if there is a British Open effect which determines how you do based on your draw. Usually the weather is perfect in Augusta so it's not an issue but with wind and maybe rain will the guys who go out early have an advantage?

8:50am PST: Golf is often too elitist, too stuffy, too, well not fun. However, the last few years on the Interwebs we have great golf comedy happening with NoLayingUp and WrongFairway. Added to this mix are the great course-specific accounts like the Lone Tree at Chambers Bay. The Augusta National course has its own comedy account and during this Masters I highly suggest you check out Rae's Creek.

8:25am PST: 2 months ago I said, "ReGripped make sure you take Thomas Pieters in your Masters fantasy pools" Of course, he didn't play so hot in that 2 month stretch so when it came time for picks this week I was like "Nah past-ReGripped I don't think so". Well guess who is -3 and leading the tourney?

In other non-fantasy news, the wind really seems to be picking up out there. I heard wind gusts could be as high as 25 mph? That is Kapalua levels right there. Even the pros seem to be befuddled. 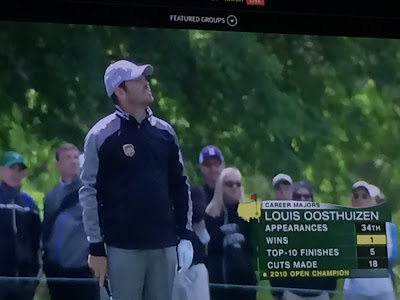 8:15am PST: According to Weather.com it is 60 degrees in Augusta although it feels like 58. Who are the crazy patrons wearing shorts? Maybe my California blood has thinned out too much. What is more interesting to me is that most of the golfers in the featured groups aren't playing so hot. Kiz, Hadwin all +2. Scott and Sullivan are both even par but there really isn't anyone sniffing red numbers in the early session.

8:05am PST: Every year something new pops up about the ANGC property that makes me cock my head like a dog. This year it is this lake. 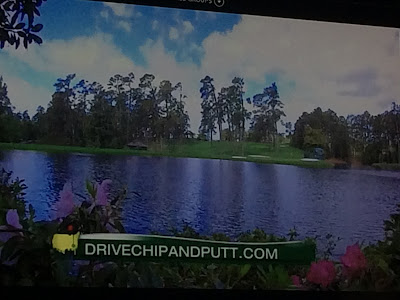 Looking at Google Maps, I am willing to bet this lake is part of the par 3 course but if anyone who has been to the course knows for sure, let me know. When you have never been the tourney and only have watched on TV/online, trying to figure out how all the holes fit together on the property becomes part of a jigsaw puzzle.

7:45am PST: Sandy Lyle has had a fascinating career. He is a 2 time major winner (including the Masters) and Golf Hall of Fame member but for the most part he really isn't discussed much in golf circles nowadays. He has had a second career resurgence of sorts in the world of hickory golf where he has won a few world titles. All of this is to say that he is currently on the first page of the leaderboard. Both him and Fred Couples. The over 50 set is kicking some butt this morning!

7:15am PST: The greens seem to be playing really firm but yet the fairways don't have much rollout. I guess we are seeing live and direct the vaunted subair system which sucked all the moisture out of the greens after the last few days. Some people are adjusting well though as Adam Hadwin (Mr. 59) just made birdie on 4 using what looks like to be a 4 wood? Speaking of dark horses, Hadwin is one of them for sure. You always bet against the Masters rookies but I think that truism is going to be less and less true over the coming years.

7:00am PST: Growing up my favorite golfer by a country mile was Fred Couples (and still is!). As a new generation has taken to the stage my loyalities have become divided and I find myself rooting for many golfers. Certainly Jordan Spieth is up there as is Jon Rahm and HV3. One other golfer who I consider a dark horse candidate to win this year and has just finished playing 1 is Kevin Kisner. This guy has game and more importantly, a great outlook on the game. Go Kevin! 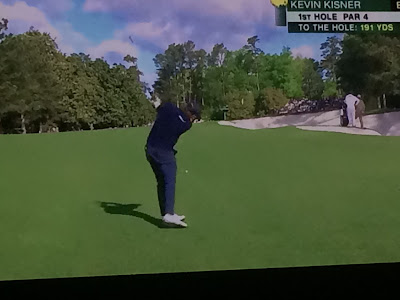 6:30am PST: Well it looks like it is damn cold there in Augusta Georgia. Everyone is wearing beanies and sweaters and some crazy patrons are wearing shorts! With the leaves on the ground, this looks more Fall-like than Springtime. 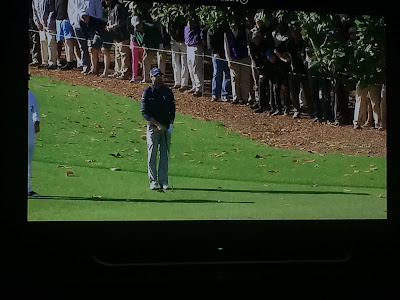 6:15am PST: Damn its early. Did the tournament ever start this early ever? Well the birds might not even be awake here in SoCal but we are off and running! First up, my yearly look and the new Masters schwag that I am coveting! 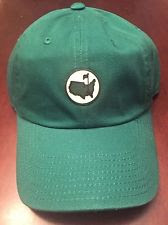 Most people don't realize there are two velvet ropes at Augusta National. The first is getting one of those coveted patron tickets. The second is getting into the VIP areas like Berckmans. I don't need just a Masters hat, I need a VIP Masters Hat (especially that hat above)! 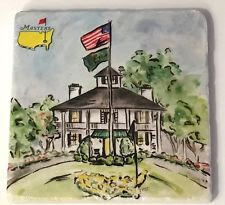 A lot to like here. Simple, Grandma Moses-type design. Clearly the Masters and something utilitarian (mostly). Checks all the boxes, sign me up! 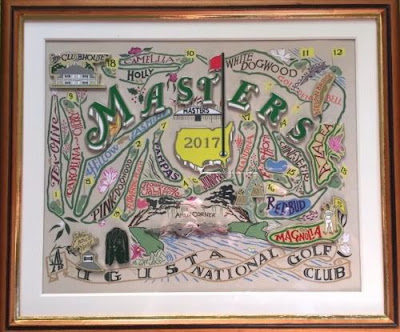 I love my Masters Posters of the 12th hole done in a WPA art style but I would burn that to the ground in 2 seconds to get my hands on this bad boy.

All pictures, screengrabs and other intellectual property are not owned by me but only used here for news and commentary.