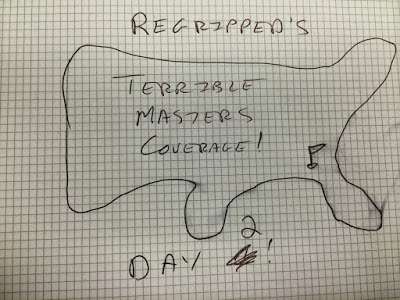 Whew Day 1 was pretty windy right? The wind blew so hard it blew off a lot of the top guys and it will be interesting to see what conditions have in store for the golfers today. Follow the madness below!

4:25pm PST: With the sun setting in Georgia where do we stand after two days? Hoffman fell back to the pack but not off a cliff so he is still in it. Everyone's favorite dark horses Sergio, Pieters and Rickie are also tied for the lead. Do any of them have the mental prowess needed to hang into the lead?

Lurking is Rose, Rahm, Scott and Spieth who are all within 4 shots and have the game to make a run on Saturday. With the conditions getting warmer and the wind dying down these guys could put on a really good chase.

Finally we got Freddie and Lefty who know this course like the back of their hands within shouting distance. Do they have the stamina to go four rounds of excellent golf? Only time will tell but I think we will learn a lot on Saturday!

3:50pm PST: who cares who is winning the Masters when we have schwag to talk about? Ashley Mayo for Golf Digest breaks down what you can buy in the pro shop (if you are lucky enough to get behind THAT velvet curtain). I like that stuff a bit better not only for the exclusivity factor but also because the word Masters isn't emblazoned on everything just the great logo.

3:05pm PST: Ok so Freddie gets around the 16th with a bogey dropping him to -1, 3 back but still in contention.

What is fascinating to me is how many players don't go for the green in 2 at the par 4 11th but will air it out in 2 at the par 5 15th. It goes to show you that it's not just distance but strategy that counts at this course.

2:15pm PST: Sorry for the delay in posting but with Freddie near the lead at Augusta, my eyes were glued to the Amen Corner feed. They will be again as The Masters has a 15 and 16 feed as well. It has been remarked by others but the announcer teams on these holes are some of the best in the biz and I would listen to them over most other announcers (and yes over Nantz on the broadcast feed).

1:20pm PST: Continuing the old guy parade at the Masters, Lefty is on the first page of the leaderboard. He was a popular pick coming into the week because he has won here before but more than that, he really gears up for the majors. In fact one could argue he only gears up for the majors anymore and many pros follow suit by planning their schedules to peak at the majors rather than just playing the schedule. I don't begrudge Lefty or the pros this at all but I think you can psyche yourself out if you put SO MUCH emphasis on 4 tourneys rather than treating it as just another stop.

12:45pm PST: One of the best things about Augusta National are the greens. They are firm and fast, they have crazy breaks and devious pin positions. Yet when you watch the tourney, these twists and turns often do not present themselves to the viewer. At Chambers Bay Fox debuted a technology that shaded the hole so you can see the plateaus and ridges. While this might mess up the pristine green coloring of Augusta I think this technology should be utilized there and all tourneys to give the viewer a home a real sense of what the pros are up against.

12:10pm PST: I always wonder about the logistics of staying in Augusta. First it's a small town and the players and their families take up a bunch of rentals. Then you have tens of thousands of patrons coming into town. I have looked into housing in the past and I think the best bet is 30/60 minutes either East or West of the course. If I ever go I would want to do it up right and try to stay in town as close as possible. Have you gone and if so where did you stay? Tell me in the comments!

11:45am PST: And of course Fred fans the flames of my fandom even more by sticking a shot to 6 feet on Magnolia. If there ever was a fan favorite in Tour it was and is him. People love his swing and his easy going demeanor. They love the Masters win and a bunch of his other ones. In an era where a lot of guys wear wraparound shades and express no emotion Fred seems approachable and thus rootable.

11:10am PST: To say that Hoffman has fallen back to the pack is an understatement. He started off -7 and is currently-4 with a two shot lead. Best of all, for me at least as a fan is that Freddy is moving up the leaderboard and is currently fifth! Given that he is my favorite player of all time and has been threatening retirement, I might lose my mind this weekend if he is in contention!

9:45am PST: There is a rule of thumb at the Masters tourney, first timers don't do very well. Jordan Spieth greatly upset the curve by going 2-First-2 in his first three Masters. Given all the youngsters doing awesome things I thought they would be similarly doing great things at this course. Whether it's incorrect ball placement off the tee or the inability to read the breaks in the greens, first timers like Luck, Hatton and Tanihara, they are all flaming out. The old warhorses like Lefty, Sergio and Freddy are all doing great.

8:45am PST: Damn you Callaway Golf, why do you tease me with this article about secret Masters menus? http://cmp.callawaygolf.com/2017/03/15/11-things-first-timers-must-do-at-augusta/
If there isn't anything I like more it is velvet ropes inside velvet ropes and if I have an insiders shot at something I am going to take it. That being said, if I ever make it to Augusta, I am definitely going to 12 to get this "secret" drink (and also to watch the 12th hole).

In actually golf updates (what is this a live golf blog or something?) Sergio has started early this morning and has gotten into sniffing distance of the lead. Sergio has firmly taken the mantle of "best player not to win a major" from Colin Montgomerie and Lee Westwood and I bet he will get that monkey off his back one of these years. Everyone seems to be picking him for The Open this year but watch out if he can post a score today, a Spaniard could be wearing the green jacket!

8:15am PST: What is in a name? I take a look at the hole names of ANGC and I can figure out Chinese Fir and Flowering Crab Apple but what about some of these other ones?

There is a hole named Camellia which is also known as a Chinese tea flower. It sure do look pretty. 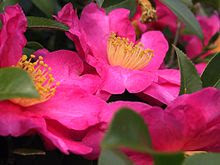 There is also a hole named Nandina which is some sort of bamboo plant and definitely isn't as pink as Camellia.

Finally there is Golden Bell, which I never knew but is another name for forsythia. 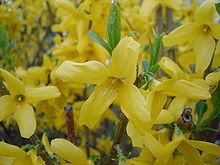 So flowers. The holes are named after flowers and a weirdo bamboo plant. This link is appropriate.

7:45am PST: It seems like most golfers are going the wrong direction today score-wise or are just holding fast. If anyone is going to catch Hoffman it is freaking McGirt (that last name!). 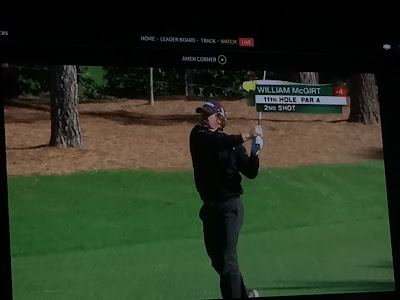 He is currently making his way through Amen Corner which is where you can definitely pick up shots on 13 but lose them just as easily on 11 and 12. You get through there at -1 you are doing good.

7:30am PST: In what can only be deemed a reaction to the terrible play of the Featured Groups yesterday and today, Amen Corner is seemingly kicking off its coverage early today. Its tough being a golf programmer. You put all your resources into a few featured groups until the regular coverage kicks in but you have no control over how those groups play. However, I've said it before and I will say it again, The Masters does the best job in golf in bringing you as much content as possible and all the Tours could learn a thing or 3 from how they do things.

7:15am PST: In sports they talk about a championship hangover. You win the world series one year, prepared to miss the playoffs the next year. Danny Willett had one heck of a hangover after winning the Masters last year. Prior to that win, he was on fire on the European Tour, a bunch of wins and top 5s. After the Masters win, I did't see his name once on a leaderboard, its almost like he dropped off of the golfing earth for awhile. 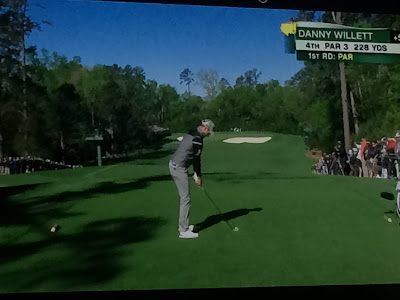 Golf is a fickle mistress and she is treating Danny rougher than most but its good to see him trying to grind it out to find his form again.

7:00am PST: OK I am awake! Not quite the 6am up from yesterday but still I am here rocking and rolling! Everyone is wearing beanies again and look cold as heck. Makes me want to put on a turtleneck and sip some coco and I am here in LA!

McGirt is out early and still rolling strong at -4. The featured groups again look like they aren't playing their best golf with Kuch the only one sniffing red numbers. When does Amen Corner coverage start?


All pictures, screengrabs and other intellectual property are used herein solely for news and commentary purposes.
Posted by Pete at 6:58 AM