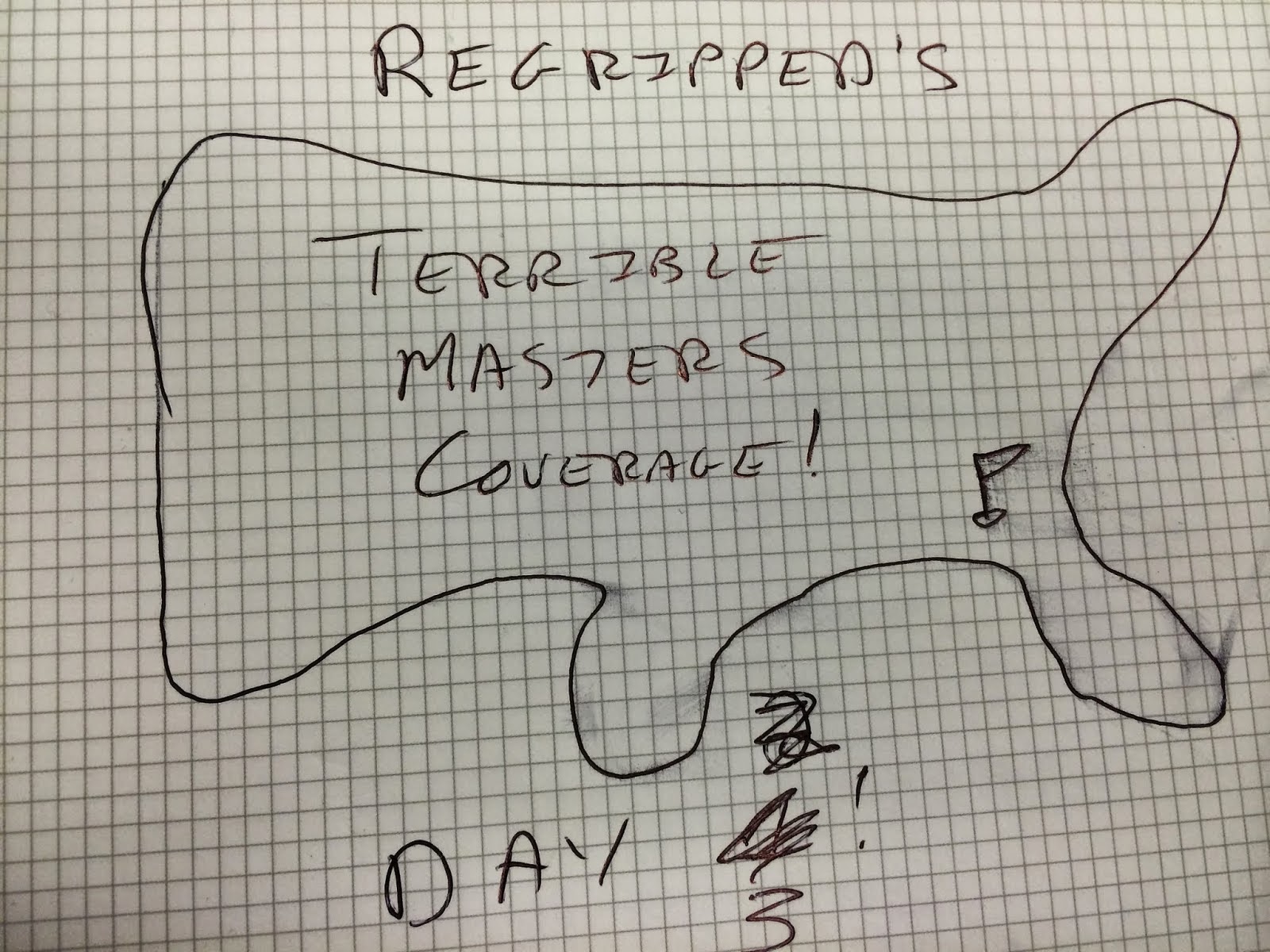 In what is slowly becoming an annual tradition, I have decided to post my ramblings on The Masters golf tourney throughout the day. Today is Day 3, Moving Day!

Moving day, the day you have to go low and get yourself in position for Sunday.  I think Na might make a move today as might Lefty. Will it even matter if Jordan puts up another score in the 60s? Who knows but that is half the fun, not knowing, let's get it on. Back after these messages.

8:00am: Coverage online and on TV is currently not happening. Of course I am spoiled after the last few days, I want my Masters and I want it NOW! Still there is always tracking the live leaderboard of the Masters: http://www.masters.com/en_US/scores/index.html

It reminds me of the olden days where instead of sending reporters out of town to cover a sports event, there would be updates communicated back to the studio by wire and then the play-by-play people would make up a story to go along with it. Right now, I am watching Stricker go low, from plus 2 to even. He is tearing up the course and I think playing by himself (or playing with the club marker Jeff Knox who beat Rory one year during a round).

8:20am: The last few days I have been highlighting some Masters gear I would love to have (tumblers and shirts) but alas I am not there at Augusta to shop nor do I want to pay triple (!?!) the price on the re-sellers market. Today my wandering eye is focused not on something Masters-specific but something worn at the Masters, specifically Jordan Speith's purple golf shirt.

For some reason I am drawn to purple in my golfwear and this shirt is as purple as it gets. Of course, Jordan pulls it off better than I do. In a true testament to the power of this tournament, almost all sizes in this shirt are sold out.

Under Armour is an interesting brand I know them mostly for layering clothes but they have really expanded in the golf space and they are THE primary brand for Jordan and just inked a new 10 year deal with him. http://espn.go.com/golf/story/_/id/12205320/jordan-spieth-armour-sign-10-year-endorsement-deal

Most pros look like a NASCAR car out there with various logos on various body parts by Jordan is all UA and I can't blame him with such a snazzy shirt like that one.

9:00am: Nothing too much to report at this point. Just watching the telegraph. Stricker has dropped back a bit, Fowler is going low but still has 13 shots to make up most everyone else is hovering around their starting numbers. So to pass the time, I am looking up everything about Augusta Georgia.

Like someone who dreams what they would do if they won the lottery, I am dreaming how I would spend my time in Augusta if I got tickets to the tourney. Research restaurants (TBonz and Frog Hollow here I come!), checking out hotels and potential courses to play in the area. What is really striking to me is how FAR away Augusta is from everything else.

On the Georgia/South Carolina border, the town is really not close to anything save Columbia, South Carolina but it looks like a pretty town with a river and it goes without saying, a world class golf course.

9:30am: And we finally have live golf (and not just Golf Channel's "Live From" telecast)! We are off with a whizbang start with the actual footage the marker I mentioned above, Mr. Knox! 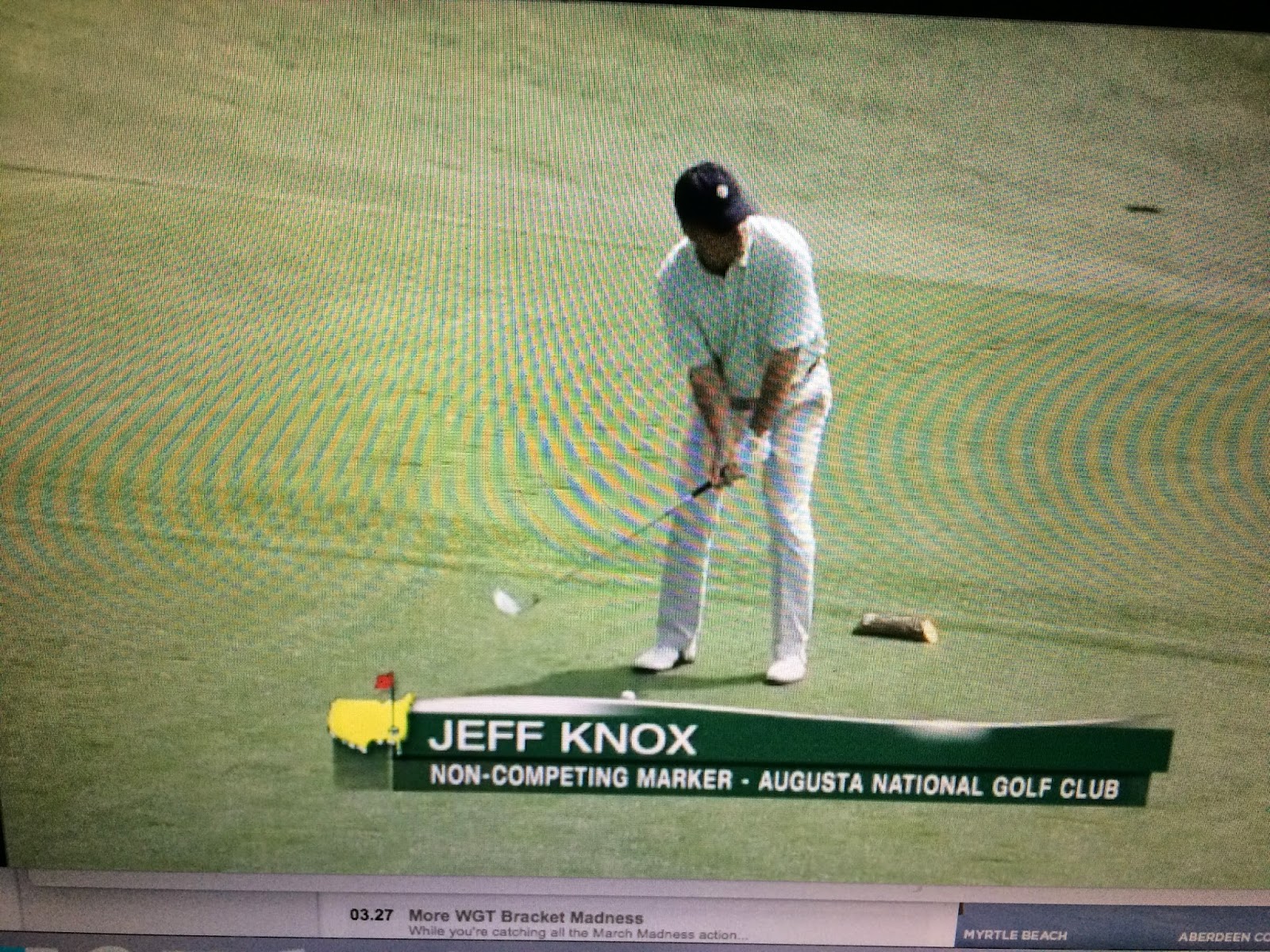 I just love the idea of Knox, a club member who is an amateur that will play with the pros if there is an odd number who make the cut. He can play as well! It is a great nod to the club's amateur roots having been founded and guided by the greatest amateur Bobby Jones.

10:15am: What would Augusta be without its stone bridges, its azaleas, its creeks? I don't know but I think it would be a shame if we couldn't see these things at least once a year. 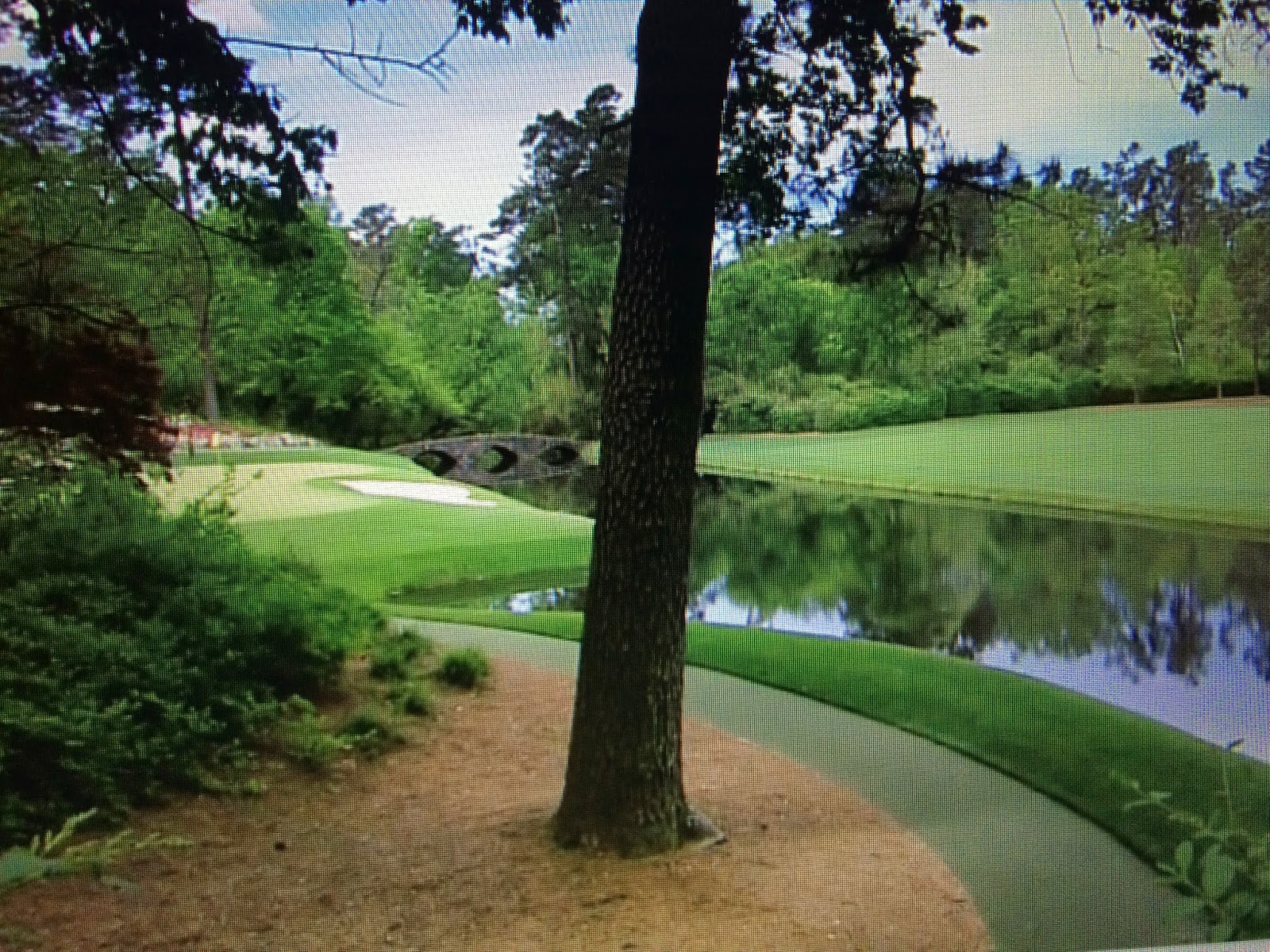 In other news, moving day gets off in earnest with Rory eagling the 2nd hole and Mr. Fashion Rickie Fowler going to -4. Of course, this is all hearsay because the front 9 is still grossly under photographed. Its all about the back side, the 12th, the 13th, the 15th, etc. The Masters website is amazing in coverage so why not throw us a front side bone?

11:15am: Moving day is happening in earnest. Rory is making birdies, Tiger is making birdies and I am waiting for someone to make me a pimento cheese sandwich. The depressing news is that even with moving up, up, up most of these guys are still 9 or 10 shots back.

One cool thing about Golf Channel's coverage of the Masters is that you get a real sense of the practice facilities there which look top notch. So many options for putting and chipping along with the normal driving range. The Augusta National complex has a lot going on other than just Amen Corner. There are 10 cabins, a par 3 course on the other side of the 10th hole, etc.

11:30am: What would Masters golf coverage be without Twitter? The running commentary as a counterpoint to the CBS coverage is welcomed and one of my favorite parts of the tournament. Here are some people you should be following over the weekend:

12:10pm: FINALLY! The Masters is on TV.  Not just any TV, I have suffered through Time Warner and Comcast for so long, I finally got DirectTV and so glad that I did. DirectTV offers enhanced features 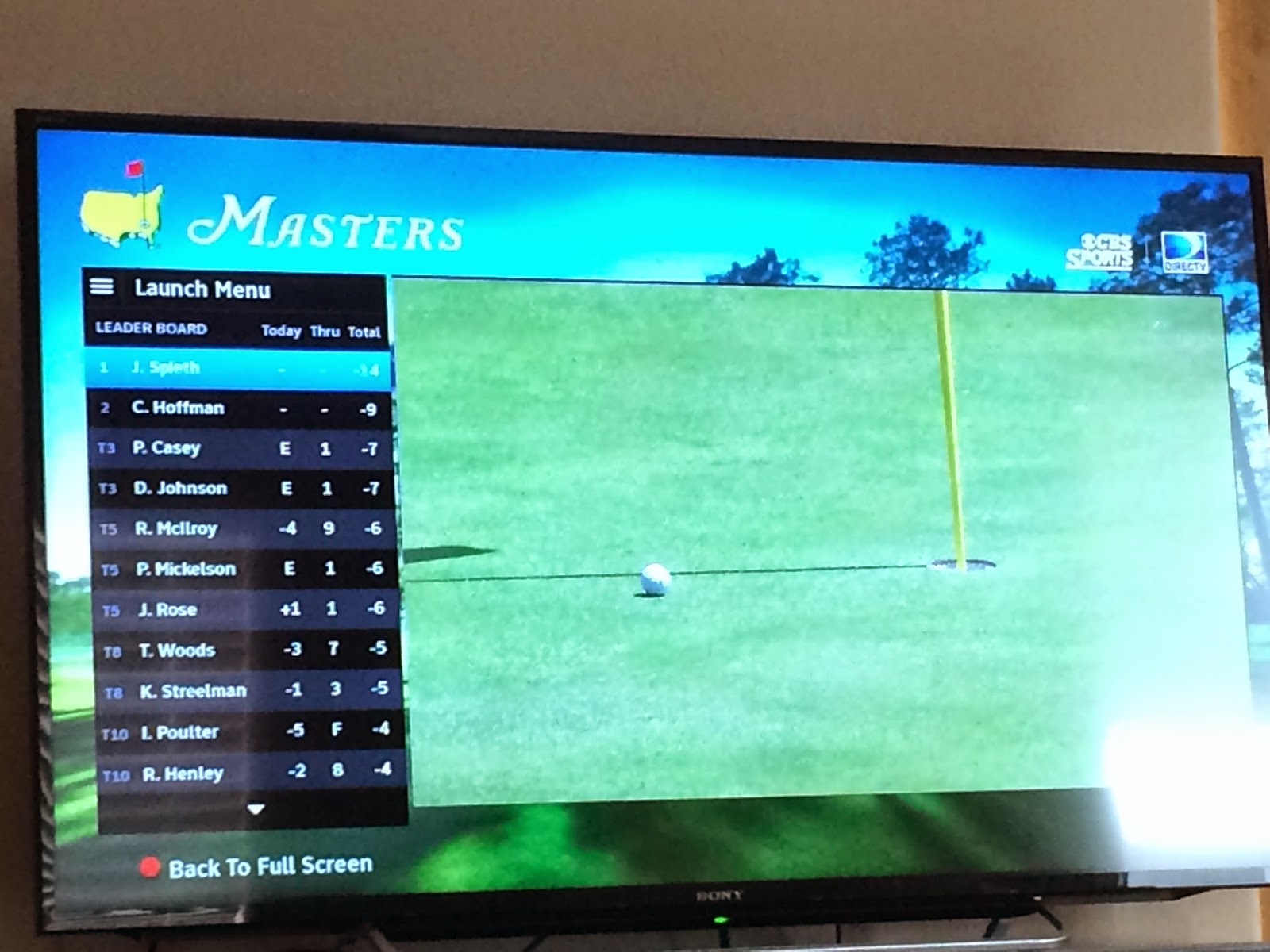 and also all the featured group pairings and special channels that you get online. I don't mind watching golf on my laptop but now its time to put it up on the big screen!

12:30pm: The announcers are trying their best to hype up moving day and then Jordan goes and birdies the second hole. I think if Jordan birdies all of the par 5's, he will be uncatchable. That being said, I called earlier today that Lefty might make a move and he is off to a super hot start with 3 birdies in 4 holes. Lefty has had a down couple of years but you know he still has elite golf left in him. Might it come out today?

1:15pm: Jordan looks like he is holding it together, making a birdie on a beautiful putt as others on the first page of the leaderboard are hitting ok to terrible shots (Rory looking at you with those tee shots). I am switching back and forth between CBS coverage and the Amen Corner just in time to see Adam Scott sink another birdie with that ridiculous long putter of his. He clearly plays better with it so what is going to happen when the ban against such long putters takes effect? Maybe retire?

2:00pm: There is an adage on the PGATour, "horses for courses".  You have Bubba, who is a good player but looks like an elite player at the Masters (most years, not this one). The opposite is also true. Lefty has yet to win at a US Open course (while the courses rotate the set-up of the rough, green speed, etc. is similar). Given how Rory has played the Masters over the years, you wonder if the course and him will ever get along.  I haven't seen the same amount of mishits from Rory at other courses, he seems to save them for Augusta National. He is supremely talented but not unique in this respect. Greg Norman was one of the best golfers of his era and yet could never get across the Augusta finish line. It's still early days, Rory is only 25, but I just don't see the same competitiveness for him on this track.

2:30pm: Jordan has had an up and down day. 2 bogies but 2 birdies. Even still, he has a multi-shot lead on the field which belies the fundamental truth that a tournament is 4 days. What you do on Day 1 is just as important as Day 4. The famous saying is that the Masters doesn't start until the back 9 on Sunday but in order to get to that point you have to lay the groundwork on Thursday and Friday and Spieth certainly did that going 14 under. Of course, it helps when you make birdies on the 12th. 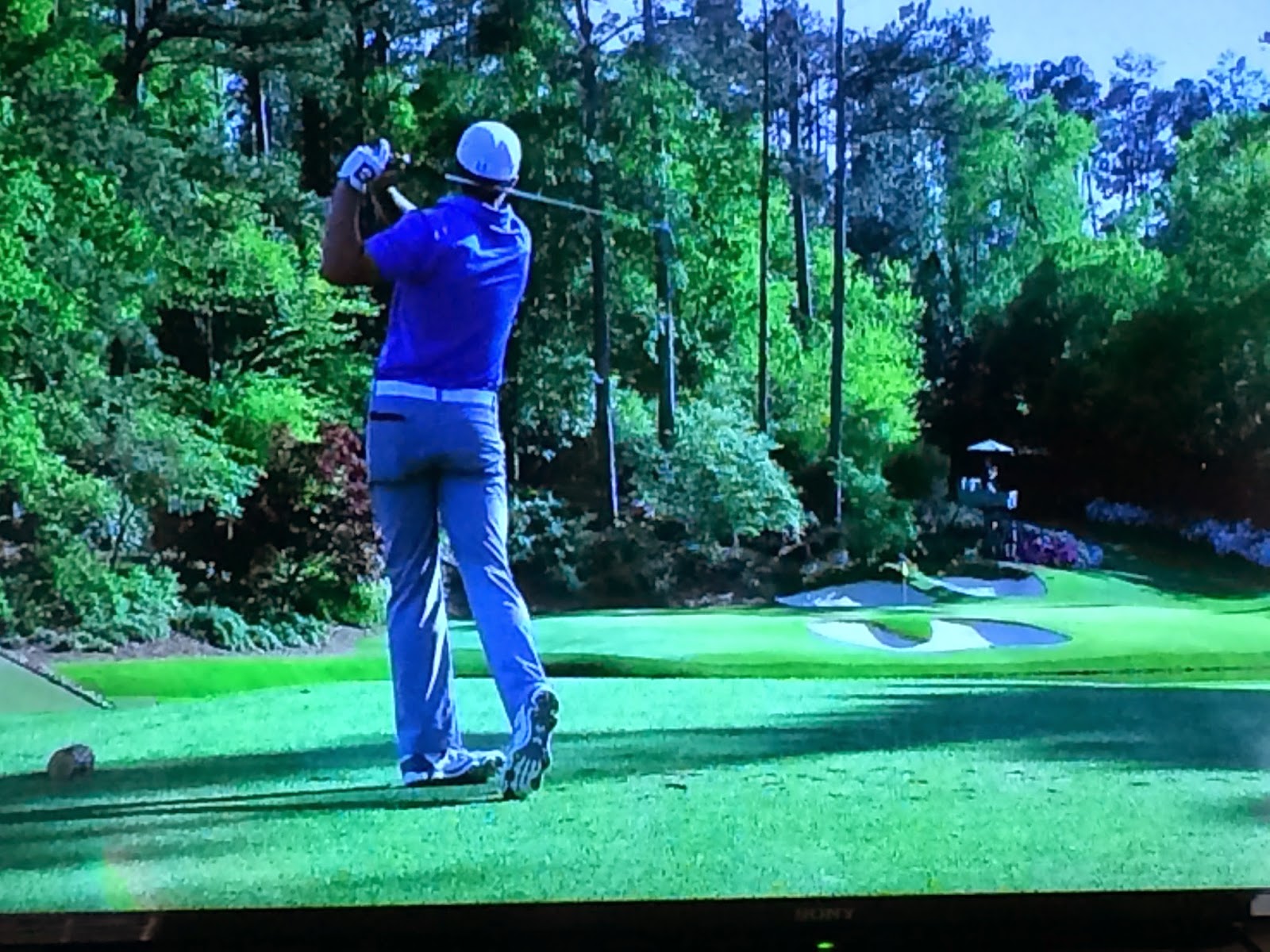 3:10pm: The shadows are getting long on Augusta National. Jordan continues going up and down with 2 birdies and then a bogey. Still he is 2 under for the day and well clear of the field. Lefty is doing his best to keep pace and I expect him to make a real charge tomorrow. Like so many great players, if their game lets them down it is putting and Phil's putting has been on this week. We will see if they turn up those under-green heaters for Day 4 and make the greens faster.

4:00pm: Day 3 is in the books, where do things stand?
- This is Jordan's tourney to lose. He is playing lights out and has been for some time. I was super impressed by him last year when he battled Bubba and while he was seemingly gripping it too tight and in 3rd gear in that final round, he has been in 5th gear since day 1. Sure he had a terrible last 2 holes but I think he grinds through it tomorrow.
- Lefty has come back from the dead. The putter is working and that is making him confident in the rest of his game and his irons and driver are being struck super well.
- Rory, what else can be said? This is not your tourney, just work on your game and get ready for Chambers Bay.
- Garcia is having another ho hum major. The guy has elite talent but in the big show just can't close the deal.
- I was surprised by Keopka. The guy hits it super long and won this year which I thought would open up things but has been derailed by injuries. Once he is fully healthy, I bet he will be a force.

That is all folks. I am climbing a mountain tomorrow, a decision I initially rued but I think Jordan gets it done tomorrow. He is a great golfer and a great person and I will be rooting for him on the hillside!

All images poorly photographed from Masters.com/CBS are their property and their use herein is for commentary and criticism purposes only and no rights are claimed to the copyright thereto.
Posted by Pete at 7:39 AM