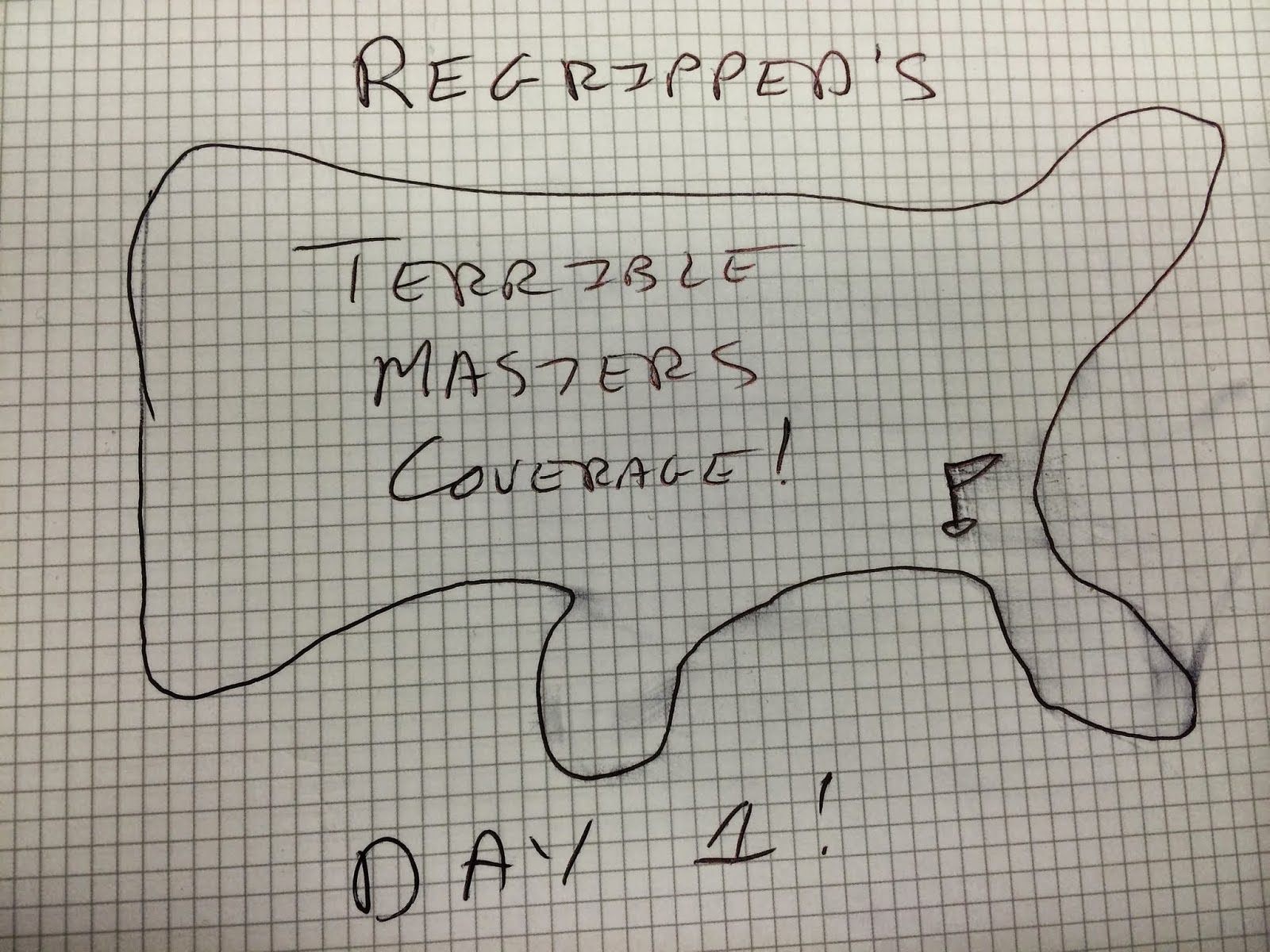 In what is slowly becoming an annual tradition, I have decided to post my ramblings on The Masters golf tourney throughout the day. Today is Day 1, opening day!

6:30am: I am awake! Amazingly. Its tougher following East Coast golf when you live on the West Coast but I feel I should be rewarded for my Masters mania by having actual Masters coverage to watch rather than "Live From" on Golf Channel. I like most of the guys who cover the masters for GC but show me some actual golf!

7:00am: Ahhhh there we go. Live coverage from Amen Corner! 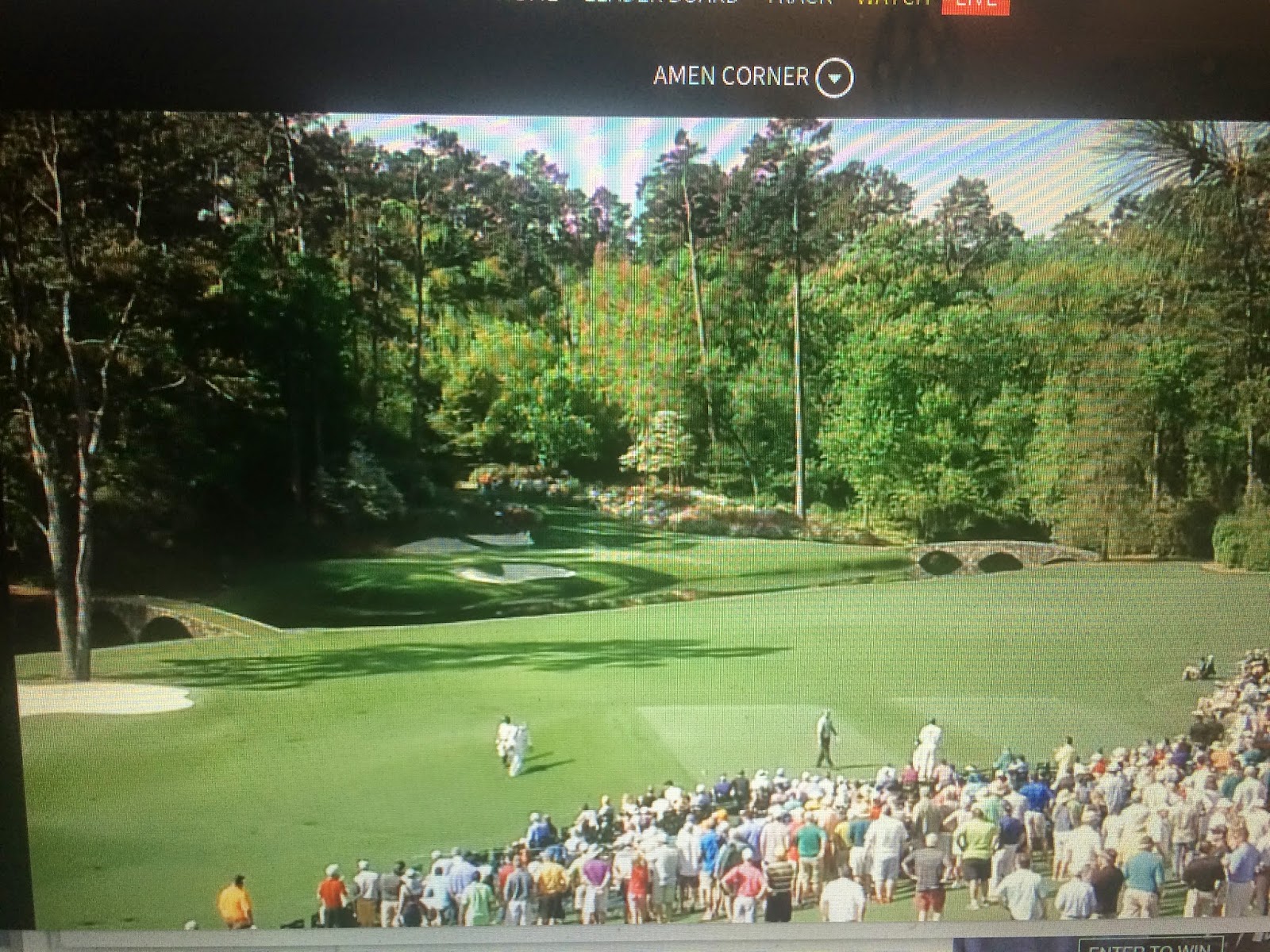 The Masters gives you lots of different coverage options in this modern age, you can follow "featured" groups of golfers, particular holes (15 & 16) or my favorite, Amen Corner. The Amen Corner coverage takes you around 11 through 13 on Augusta which are some of the prettiest and iconic holes on the course.

7:30am: My annual tradition of whether to buy Masters merchandise kicks off in earnest. The Masters has iconic schwag which until recently you could only buy at the course. Because this is the Internet age, there are whole websites devoted to finding you schwag like http://www.mmogolf.com/ and there is always ebay. First up on my hem/haw list, tumblers which have Masters badges in them. Limited edition and expensive to begin with, much less the markup on the secondary market! 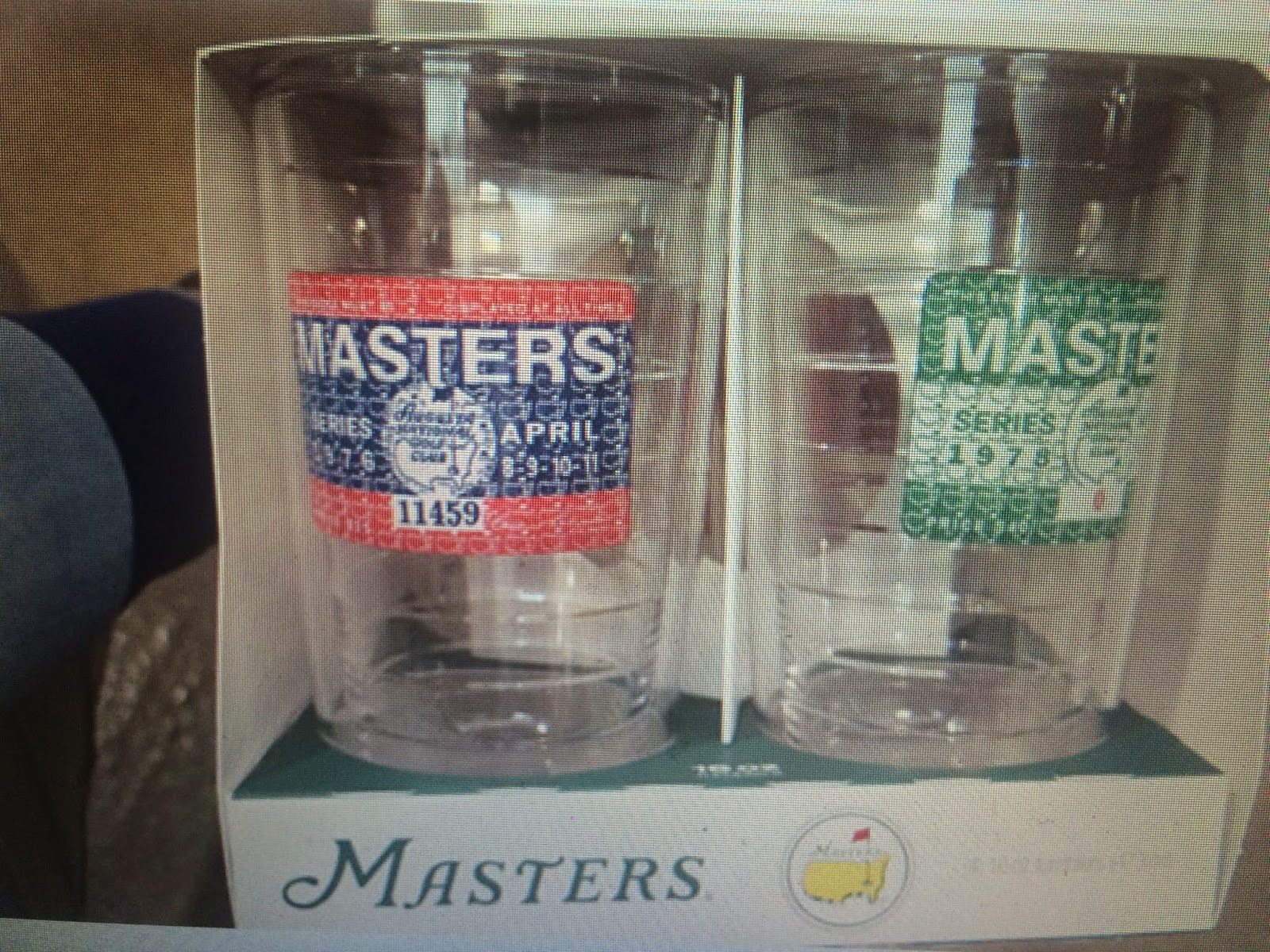 7:45am: Amen Corner is now featuring a group with Larry Mize. If you win the Masters, you get to come back to the Masters no matter how old you are. Each year the masters is kicked off by tee shots from older luminaries of the game. This year, Palmer, Nickalus and and Player hit the first tee shots http://www.pgatour.com/news/2015/04/09/photo-gallery-big-3-tee-shot-masters.html It is this continuity, unlike any other golf tournament that makes the Masters special. Where you see the past and also the future with all the amateurs that are invited to play in the tourney.

8:30am: One classic scene you will always see at the Masters are golfers and their caddies digging deep on the yardage books. 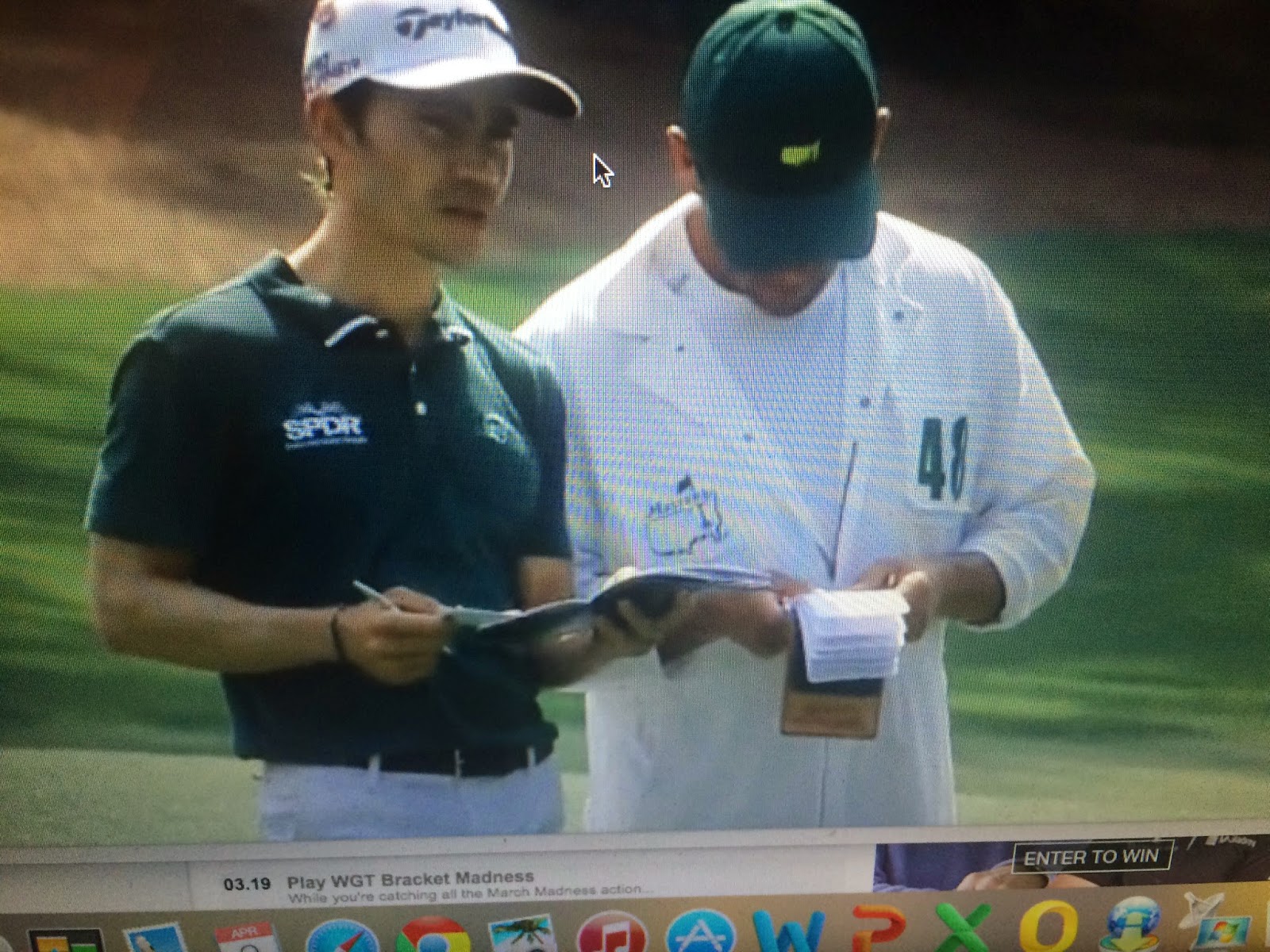 Each caddie gets a yardage book when the arrive at Augusta but that is just the beginning as caddies and players really have to play the course and get items dialed in for how they are going to get around the track. No GPS at Augusta National as far as I know. There is a fascinating interview with a caddie and his yardage book here which you should definitely check out: http://www.augusta.com/masters/story/masters/yardage-book-playing-book

9:15am: Masters coverage starts in earnest as the coverage expands to holes 15 and 16 as well as 2 featured groups. Today your choices are following Bubba or Dustin Johnson/Adam Scott. I went with the Aussie, I really like Scott's game and he is currently -1 for the tourney. Still, he uses a putter that is almost as tall as he is which takes him down a few points in my book.

10:15am: Fun fact, 3 of the top 5 golfers currently at the top of the Masters have last names that start with H (Hoffman, Henley and Haas). Other non-H's near the lead at this point are Rose, Casey (everyone's apparent darkhorse this year) and Lefty.  I am not sure what this all means at this point, early days. The course seems like it is giving up birdies so if you are going to go low, better do it today. Rain is forecasted all week for Augusta Georgia but with these conditions you better have some birdies or an H in your name.

10:30am: Ben Crenshaw reaches Amen Corner. I have much respect for his career and especially what he has done at Augusta National but I felt like his daytime talk show was a little ill advised: http://starsmedia.ign.com/stars/image/article/860/860268/gentle-ben-the-simpsons-20080317042632011_640w.jpg

11:45 My Masters favorite and perhaps favorite PGA golfer (now that Freddie is on the Champions Tour) Jordan Speith is off to a rollicking start 2 under after 4 holes. Jordan got so close last year and he is on a roll winning a tournament and being in the Top 5 in the last few tourneys.

12:15pm: First shot out of the pine straw! I love that aspect of Augusta much in the same way at Pinehurst. Due to my terrible driving habits I have often found myself in pine needles, mud, squirrel's homes so I always like see what the pros do with that type of lie. 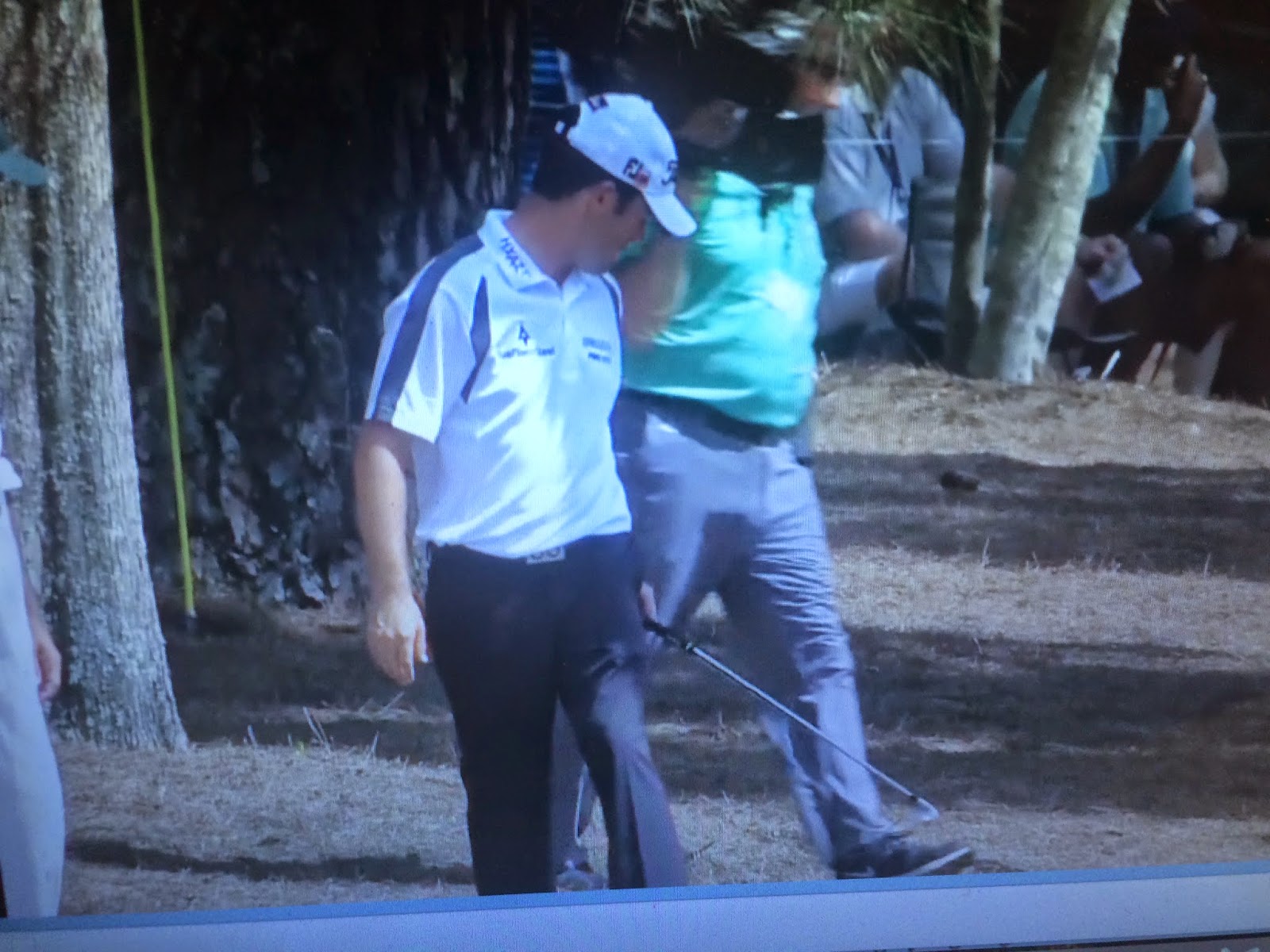 2:00pm: It was great to see my golf hero Fred Couples at the Masters. He isn't having the best day currently +5 but he is always in the hunt in almost any Masters he enters. Fred was and still is one of the most popular players on Tour and I know everyone was rooting for his shot into the par 3 12th to stay out of the water and it did and he won the tourney. It isn't the Masters without Freddie. 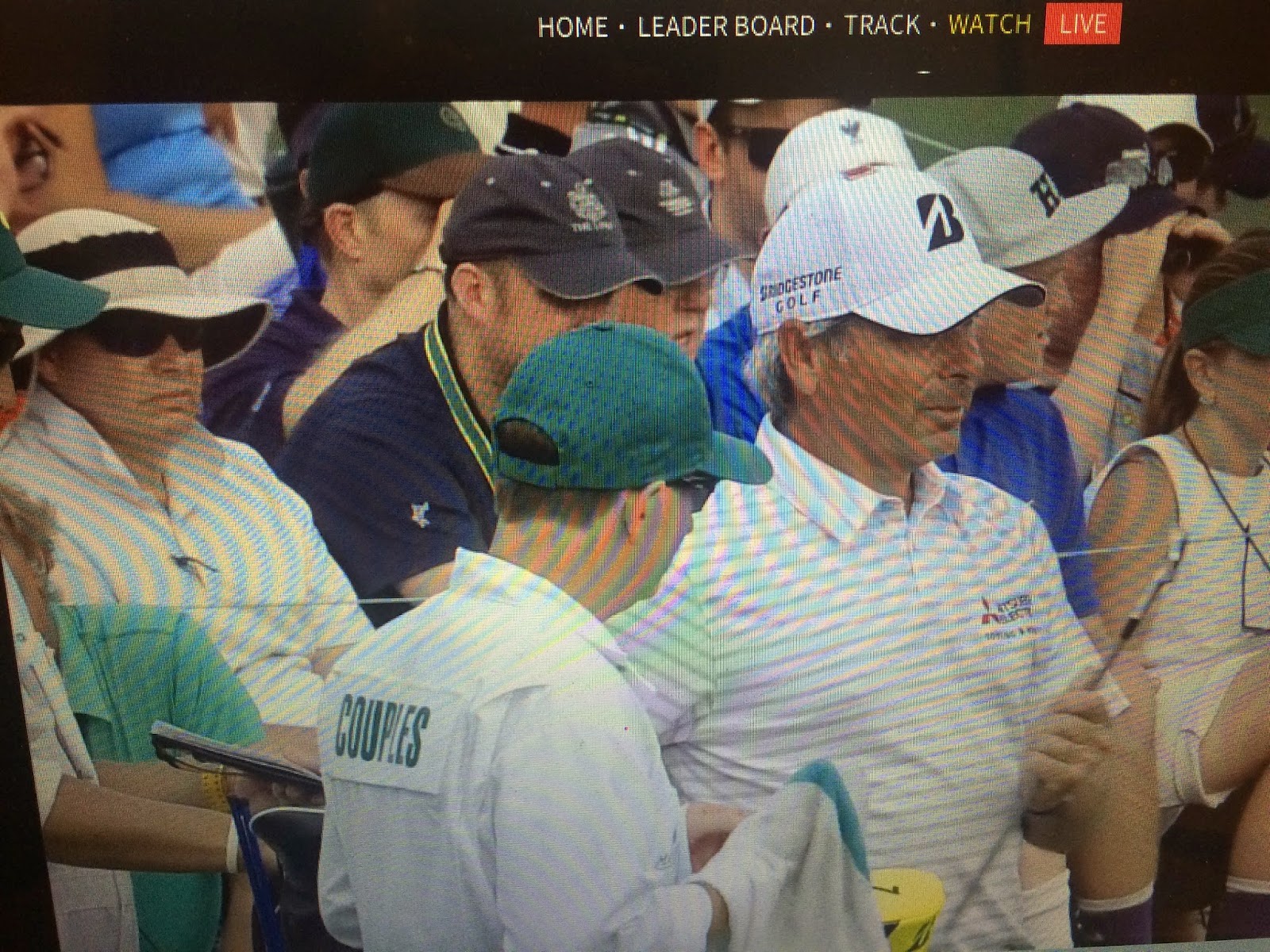 2:30pm Tiger Time on the Amen Corner Feed (I have given up on the featured groups and also cant watch on TV #firstworldgolfproblems). I was never a fan of Tiger, I didn't like his personality on the course and I was never drawn to what he was doing. Of course I respect what he has accomplished and was certainly the most dominate player of his era and one of the best of all times. Some people just rub you the wrong way ya know? Like anyone watching NASCAR I tuned in to see if he would put it into 5th gear or spectacularly flame out in a car crash.

2:45pm: So far Tiger is showing what I think will be the bellweather for his future career. Lousy shot on 11 followed up with a good shot and a par save. 12, in the water, followed up with a good shot and escaping with a bogey. Birdie on a par 5 and call it a day for Amen Corner. Up and down hanging around the cut line. When will then be now? Soon. https://awarebrain.files.wordpress.com/2011/12/spaceballs.jpg

4:20pm: And that's a wrap! Jordan (my man!) leads by 3 strokes after day 1. Surprises? Els and Mickelson near the top of the leaderboard. McIlroy with a pedestrian -1 is rather par for the course, he has not had a good 2015 so far other than the win overseas. I don't expect him to kick into gear until the British Open. The dark horses of Haas and Casey are still in it. Expect at least one of them to contend on the weekend


All images poorly photographed from Masters.com are their property and their use herein is for commentary and criticism purposes only and no rights are claimed to the copyright thereto.
Posted by Pete at 7:37 AM