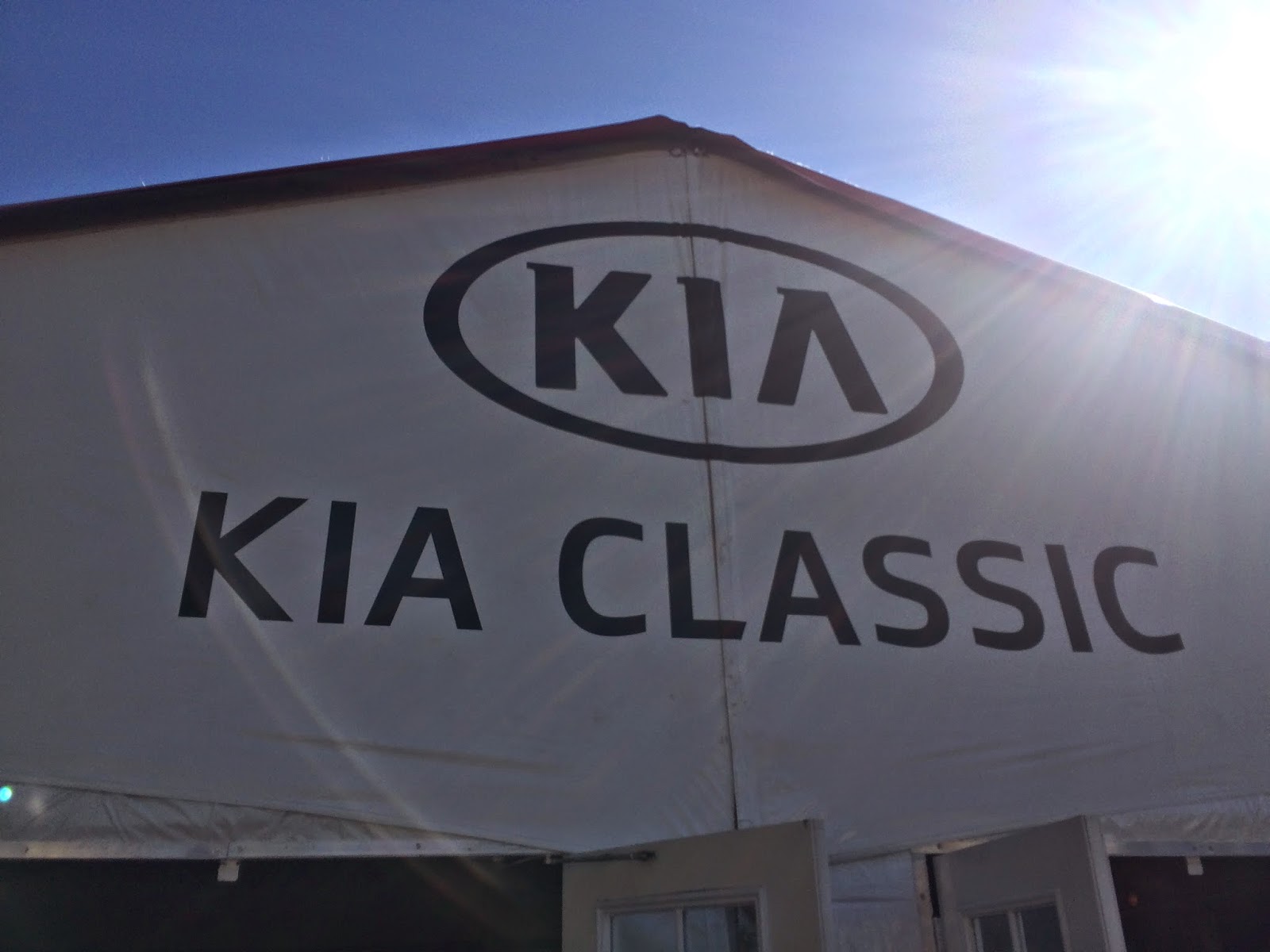 Hi everyone, my name is Pete and I have always enjoyed watching and following the LPGA tour. One of my top moments was watching Annika Sorenstam play in an LPGA event at Kingsmill and seeing her absolutely destroy the course along with the rest of the field. As much as I love the PGA and Champions Tours (and to a lesser extent, whatever the Hogan/Nike/Nationwide/Web.com/Cheetos Tour is currently named), the LPGA is tops in my book. As the tour makes its West Coast swing near where I live, I knew I definitely had to check out the LPGA's Kia Classic.

The tournament has been held in several places around SoCal over the years but has recently settled at the Aviara Golf Club in Carlsbad California. Aviara was designed by The King himself, Arnold Palmer and features a lot of elevation changes and bulldozer elements. 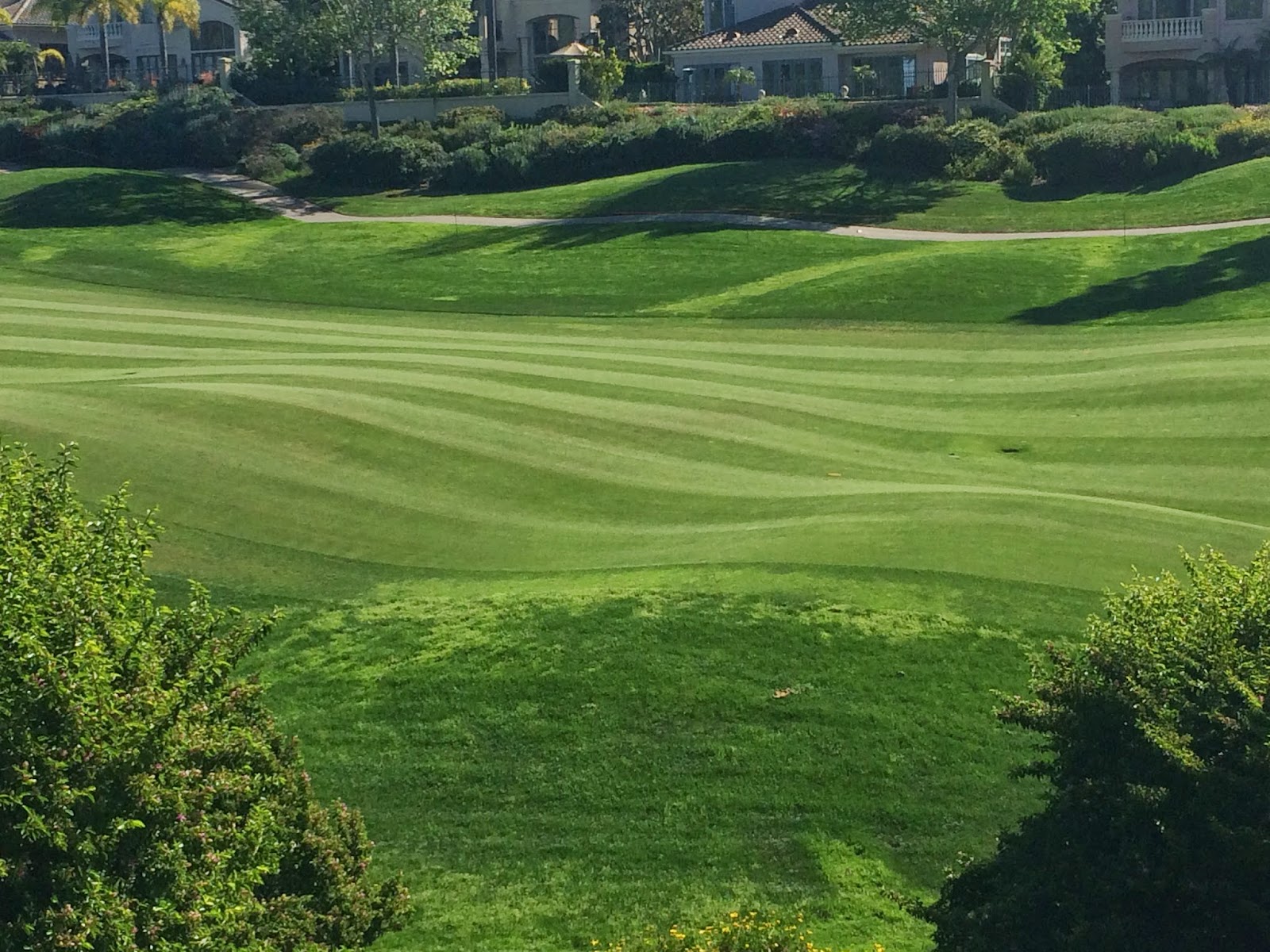 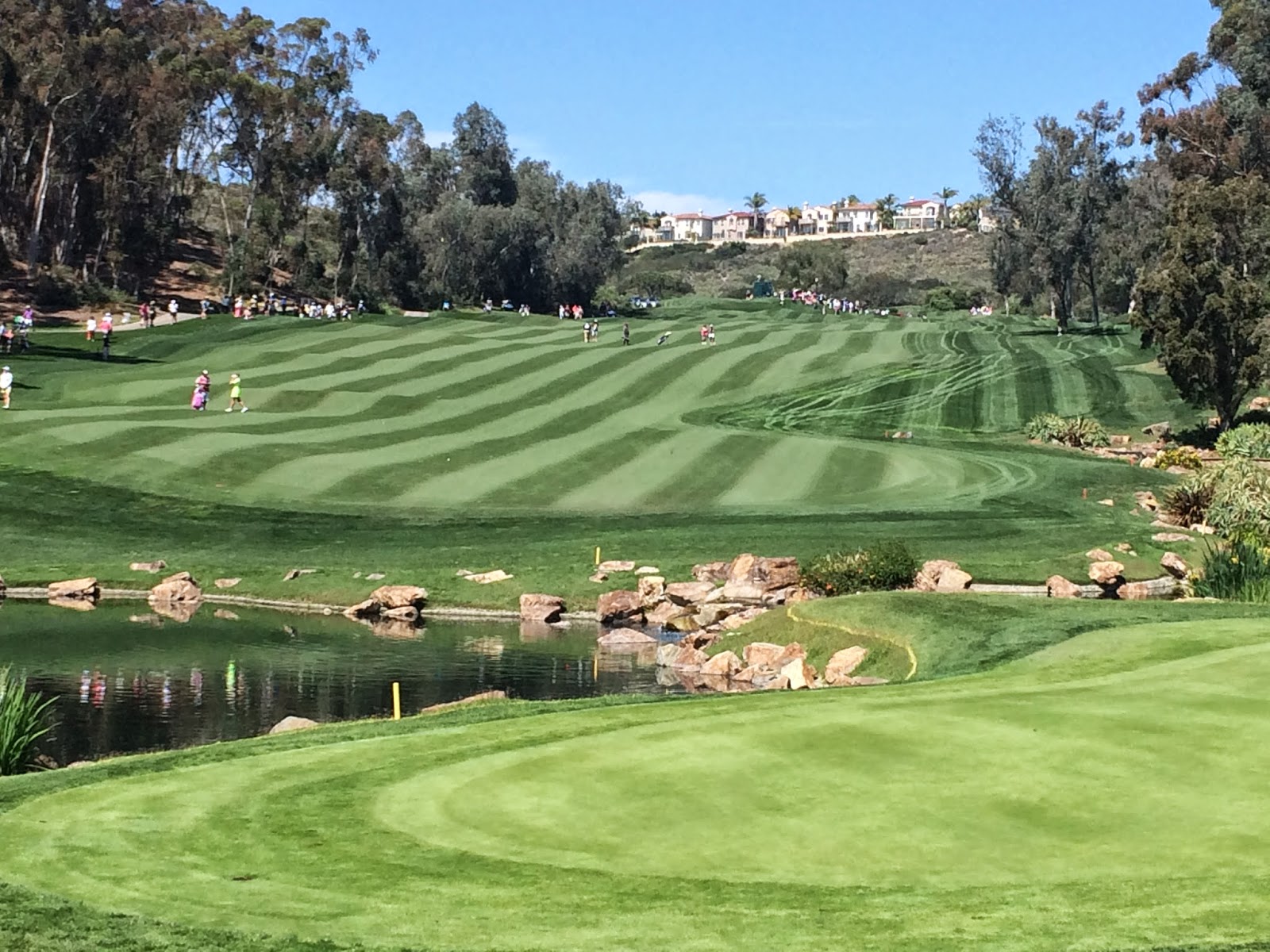 Seriously, look at this course, all of those waves and mounds. Its a surprise if you ever get a level lie on this course, even with a great drive. Bulldozer courses aren't exactly my cup of tea, I have come around to favoring the Coore/Crenshaw model of building the course using natural landscape features rather than creating them. That being said, I would LOVE to play this course, it looks really fun and challenging.

Case in point, I can't remember the last time I saw an American course with a DOUBLE green! 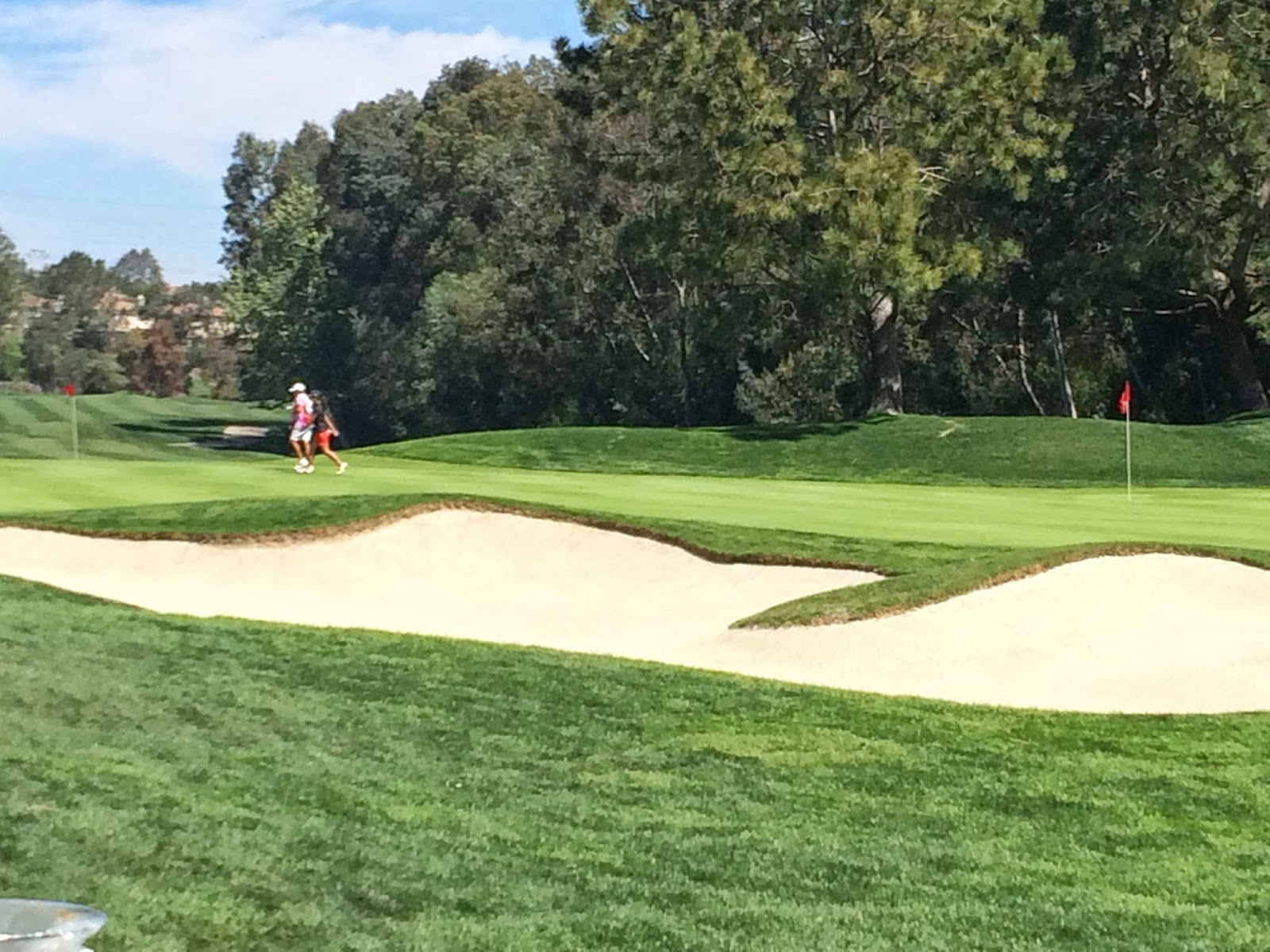 It is in the same breath fascinating and bananas, especially when you have groups playing the green at the same time. This setup is not necessarily a surprise as the mantra for the LPGA is "See Why Its Different Out Here" (with the appropriate hashtagging for our Twitter-age) and that philosophy was apparent all throughout the tournament. 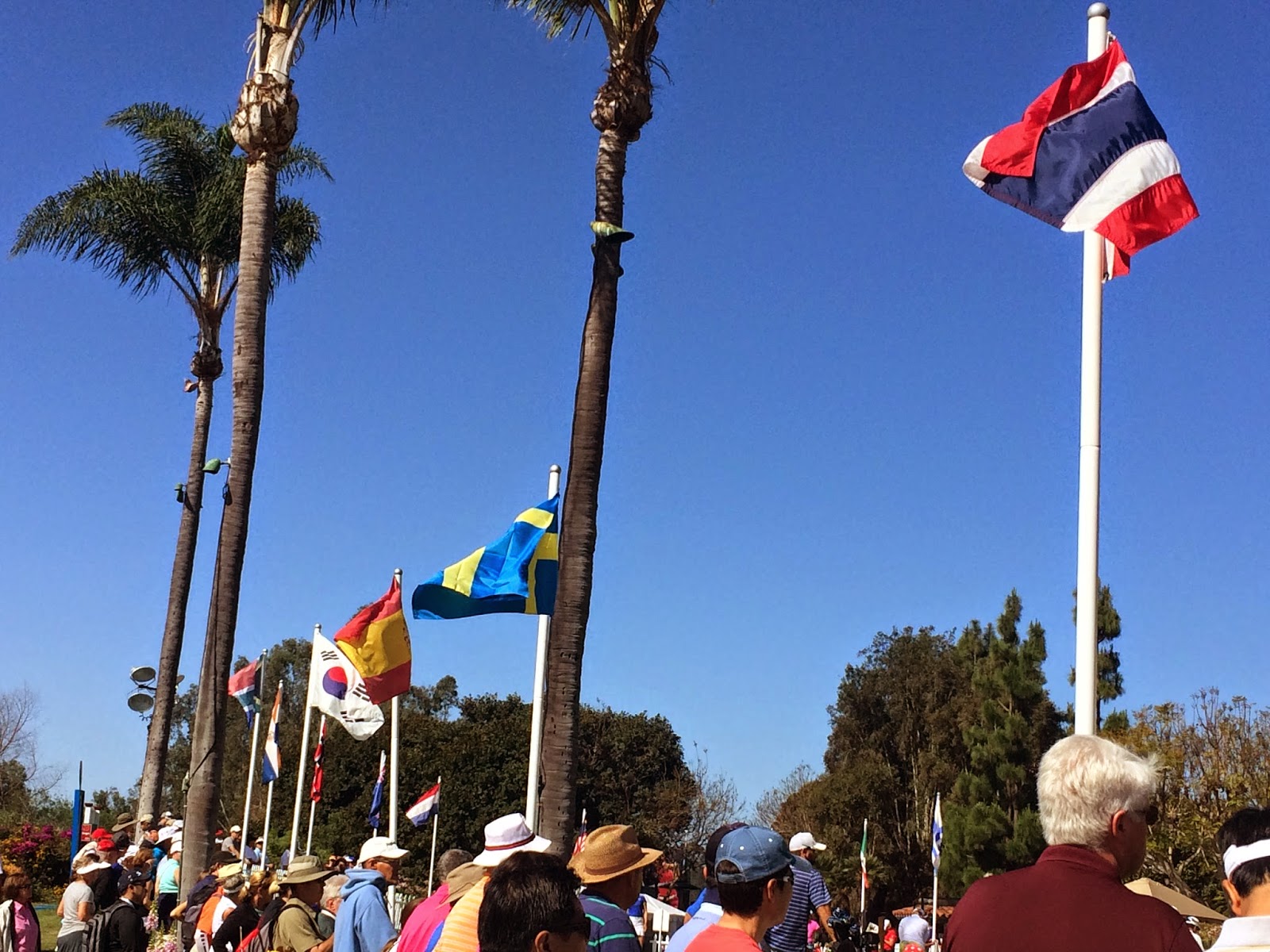 All of those flags represent players on tour and suffice to say they come from all over. The tour, while initially a US-based, has firmly embraced the global nature of sport and spends a significant portion of their season playing all over the world from Australia to Thailand and beyond. Sports like the NFL and the NBA are trying to crack the tough nut of a global presence but the LPGA could show them a thing or three about how to run a truly global league.

I arrived at the course in the morning to find that for the final round on Sunday they were using split tees and for most courses this isn't an issue but Aviara's 9's are really segmented so you really have to choose one 9 over another and then hustle to see other groups going through the other 9. I decided to concentrate my energies on the back 9, which is full of water and beautiful shots like this: 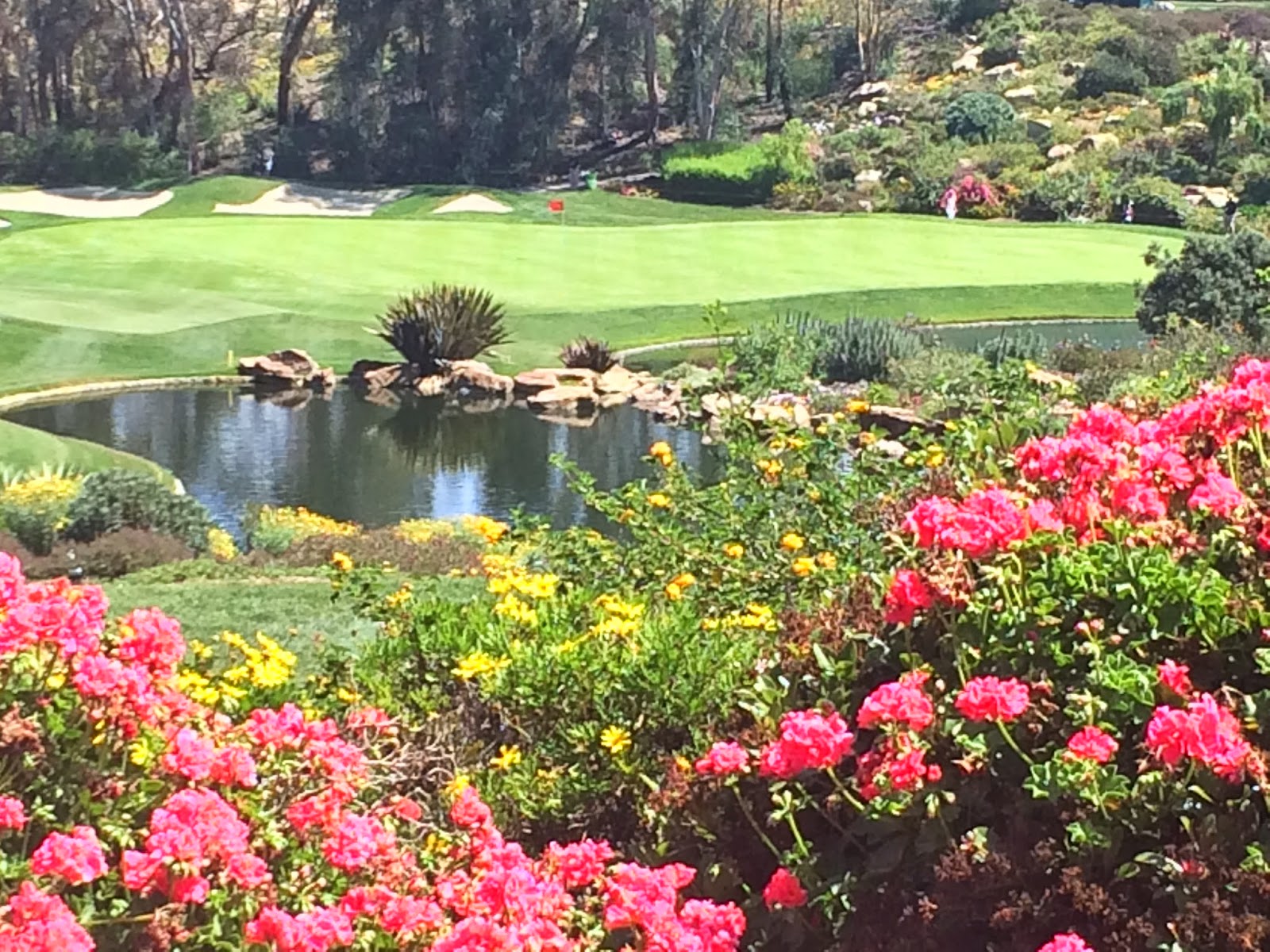 Really, water is everywhere, you are either shooting over water: 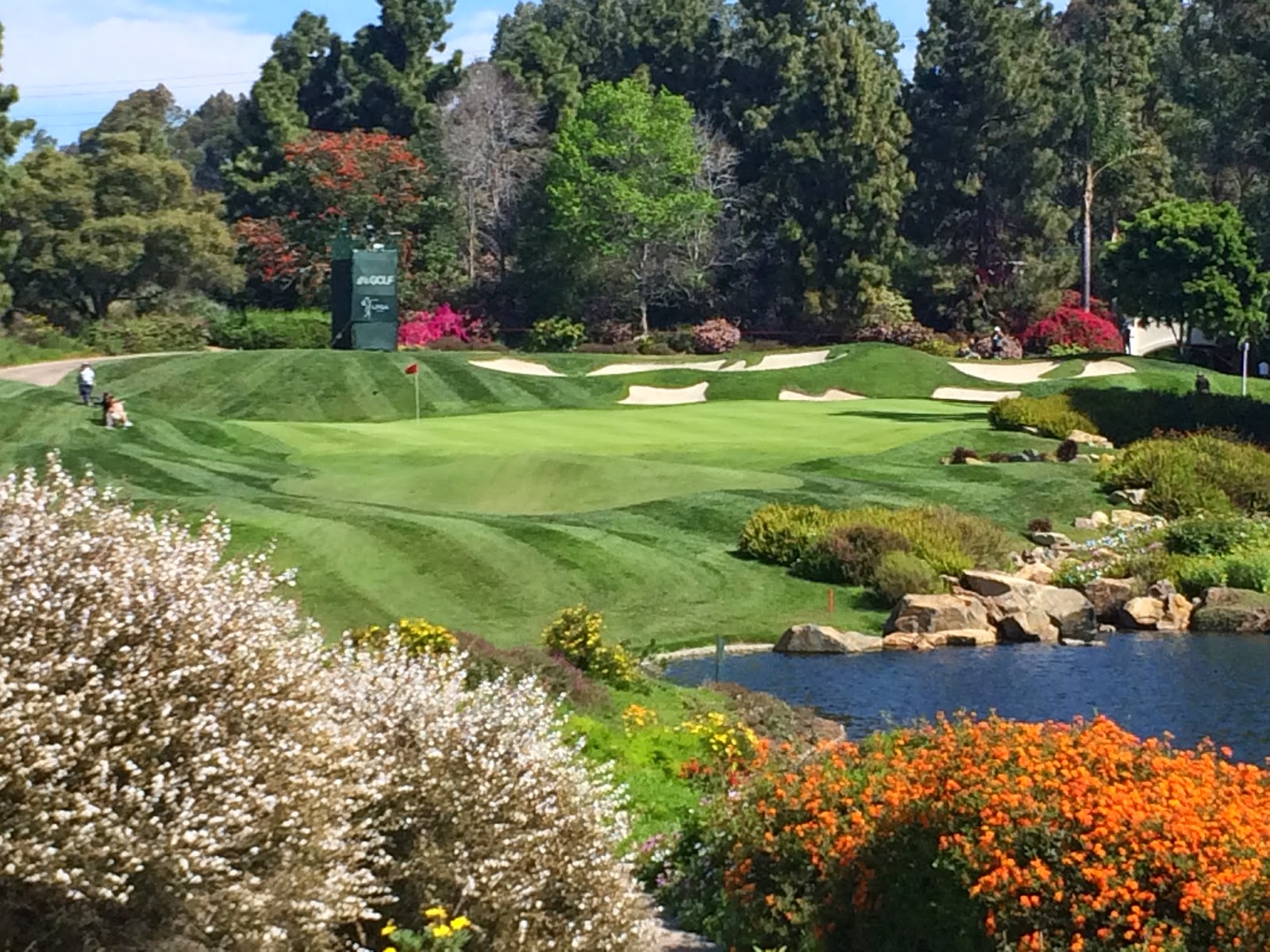 or shooting around several bodies of water. 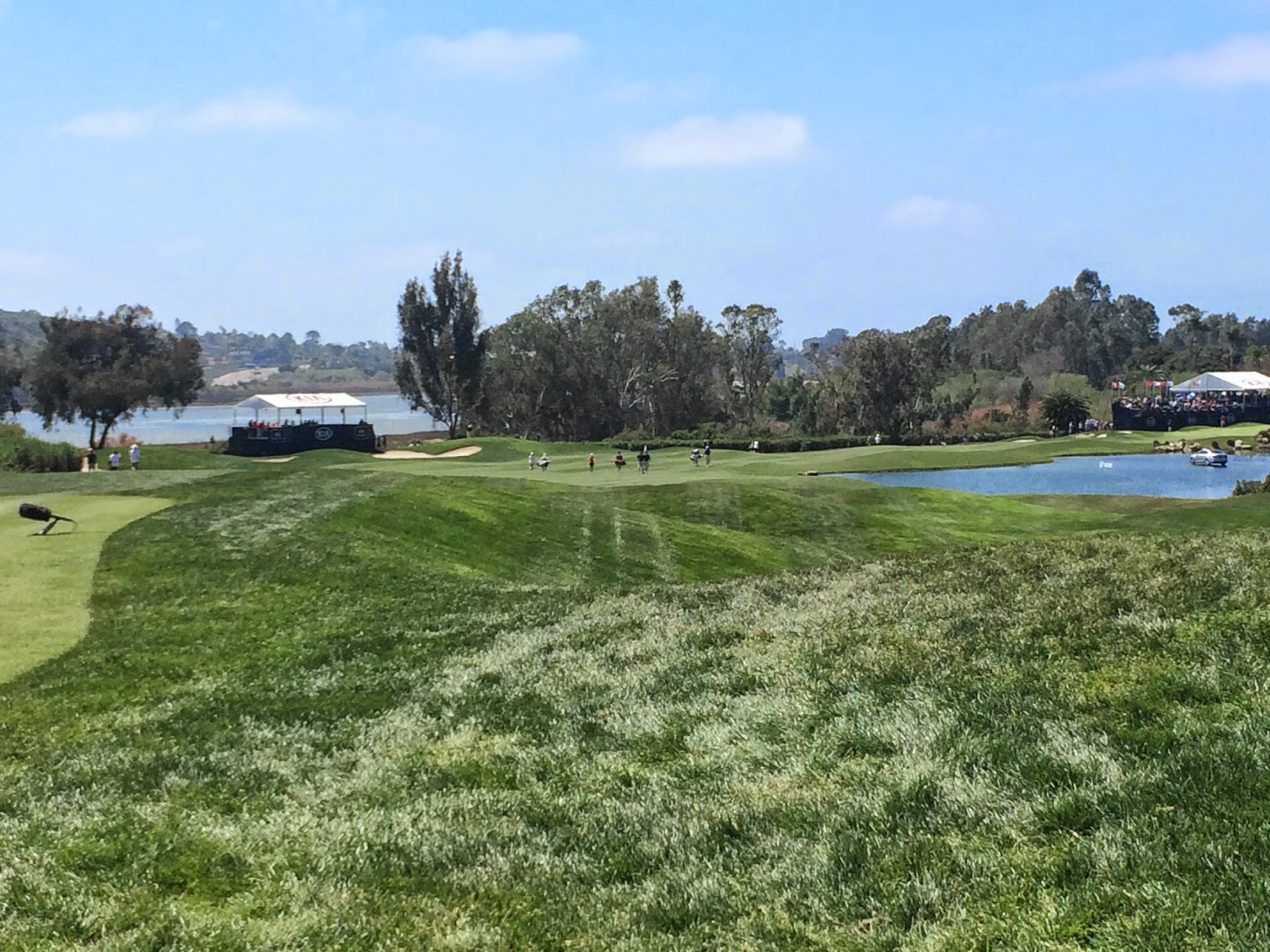 Above the 18th which is one of my favorite holes on the course. Salt water marsh to the left, lake to the right leading up a green with a waterfall which is a heck of a closing par 4. The other favorite hole is a drivable, downhill par 4 16th which has water on the left but tons of playability to the right and it was awesome to see all the pros go for it, including Michelle Wie who drove the green with a 3 wood (!?!) and almost sunk the eagle chance. 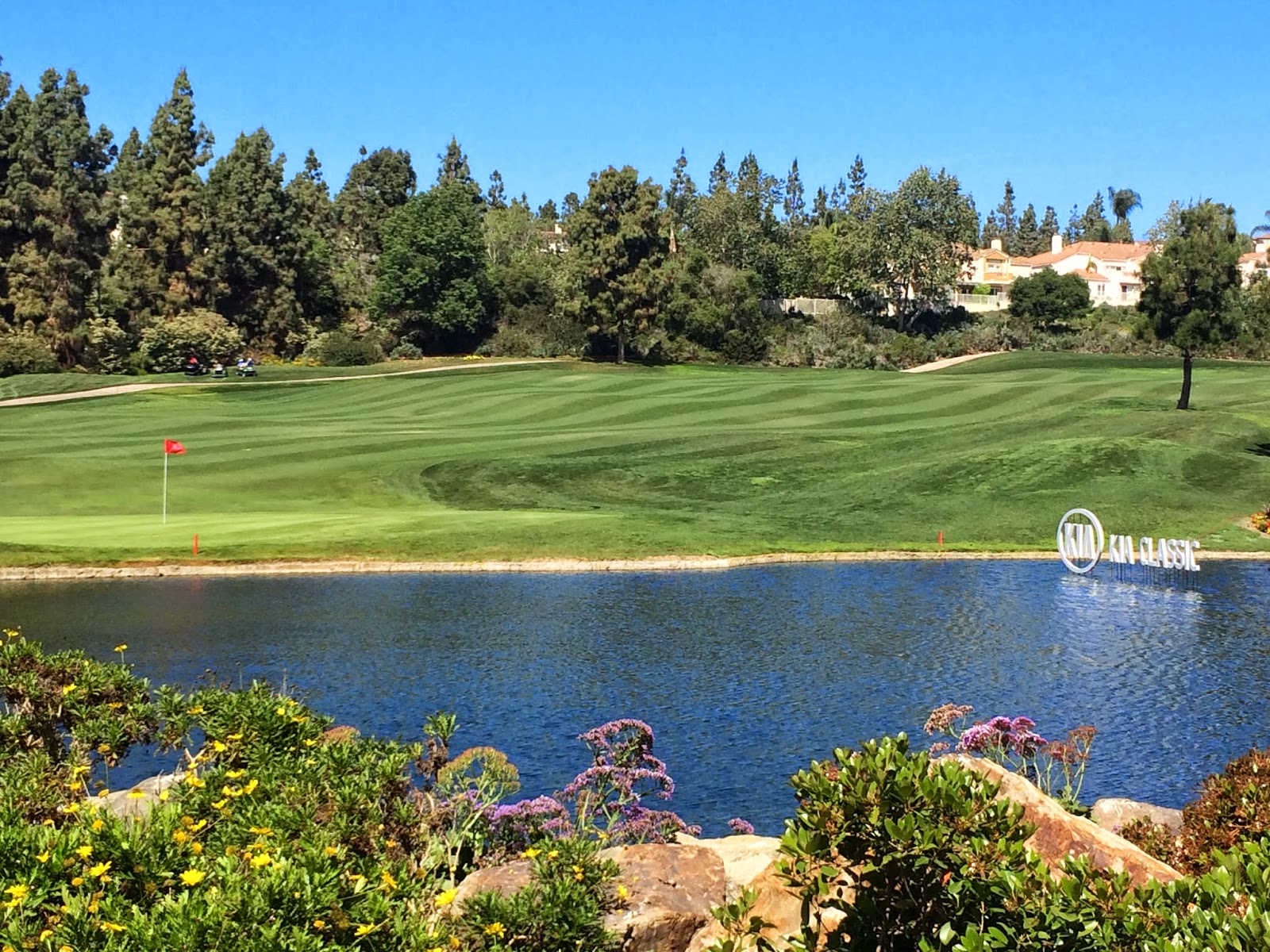 Speaking of Michelle, wow what a player! She has had her ups and downs as a player and whatever you think of her putting style (basically forming a rectangle with the putting green) her power through the hitting zone is undeniable. Not only is she fascinating to watch up close but she is a great person, singling out kids to give balls to in-round and generally having fun. The same goes for a lot of players. Danielle Kang and Sandra Gal were having a great time and that type of enthusiasm is infectious. This again is another example of why the LPGA is "different", the players are approachable and fun. How they play the course is how you probably will play the course (rather than the bomb and gouge technique that is prevalent on the PGA Tour) and they players are all distinct  rather than faceless, Oakley wearing pros.

Of course, the LPGA does have similarities with the other tours. The superstar groups are, well, superstars. HUGE groups following Stacy Lewis, Lydia Ko, Lexi Thompson and others with electricity in the air for great shots or nearly-great shots. I only started going to golf tournaments beginning last year after a long golf layoff and it is surprising that some of these super groups have their own dedicated security personnel but I noticed that with Rickie Fowler's group and Michelle's group. Upon reflection, its not that surprising but the earpiece/security-types were in attendance at the Kia Classic.

The most impressive golfer was no question Lydia Ko. She.Just.Doesn't.Miss. Its insane, she is a machine (in the best possible way). Tiger had passion and fist pumps and was dominate and Lydia just goes around destroying records and courses. Its tough to believe she is only 17 yet is number 1 in the world, has over 20 rounds below par IN A ROW and oh yea, keeps winning tournaments against the best women players in the world.

The strength of the LPGA was on full display this week at the Kia Classic. Cristie Kerr won with an amazing 20 under pay and is 10th in the world. Mirim Lee came in second and is 6th in the world. Lydia Ko was third and of course, is number 1 in the world and the list goes on and on. Each week the best play LPGA events and the cream rises to the top. Can't wait for the first major of the season, the ANA Inspiration tournament in Rancho Mirage California. Should be great! 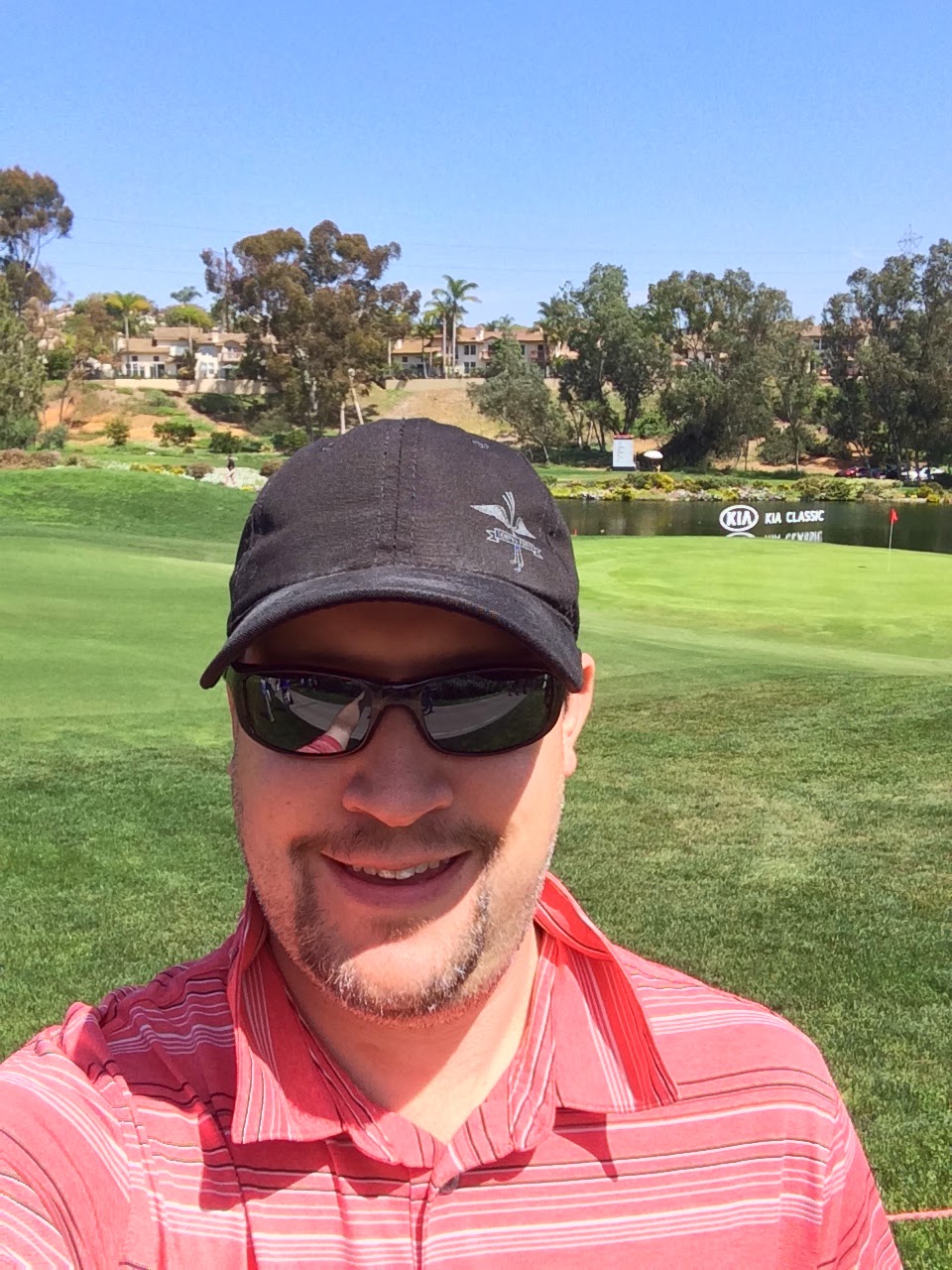