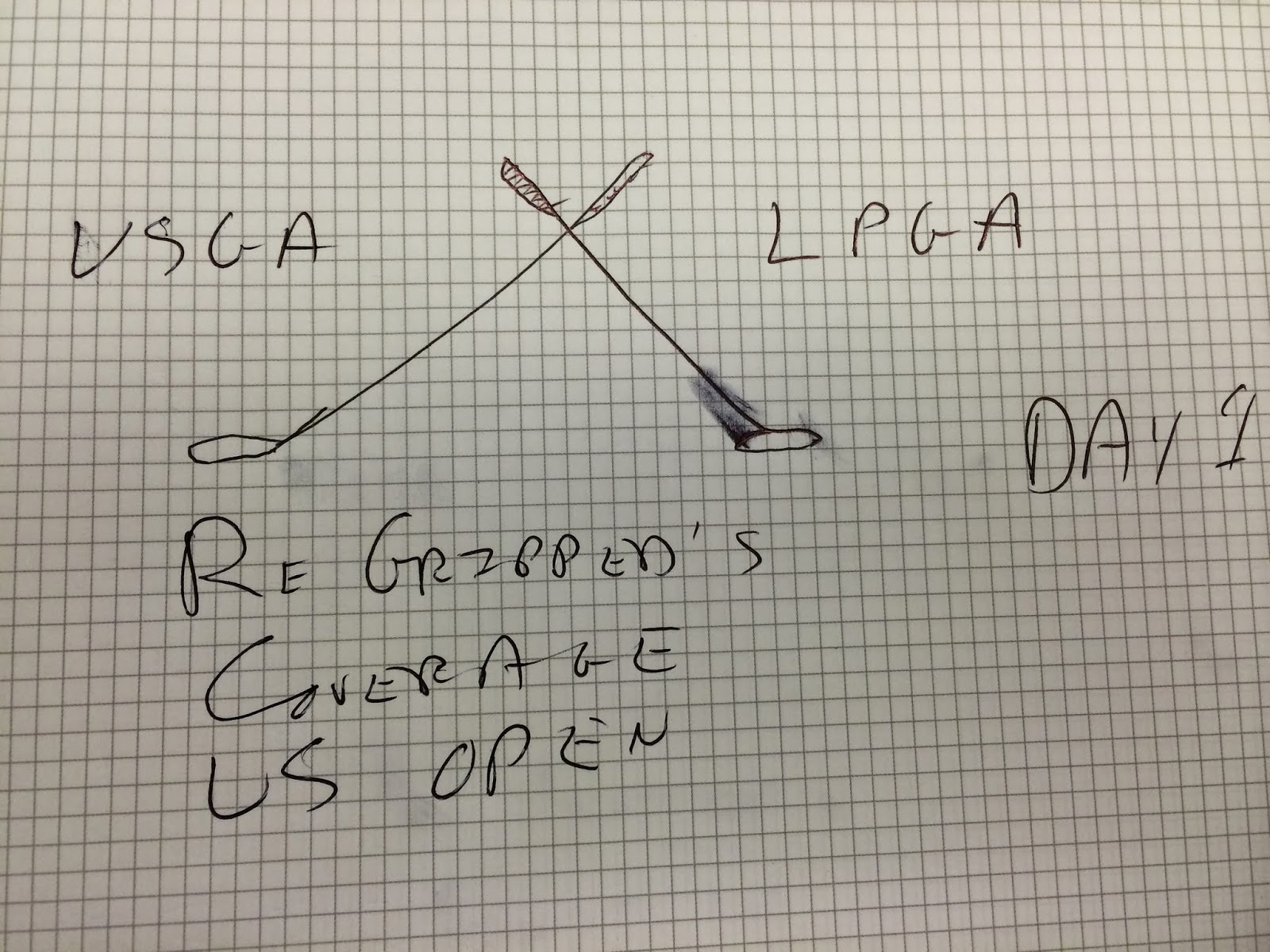 Welcome to my coverage of the 2014 US Women's Open! While I am a fan of all of golf, I am particularly drawn to the LPGA. The hit the ball about the same distances I do so their approach to the game is something to watch closely and emulate if possible. Also, the Tour is a lot of fun. Not a lot of slim, Oakley be-spectacled golfers here. I saw a couple of tournaments years ago at Kingsmill and in Nashville and now that I am getting back into golf, I am definitely getting back into the LPGA.

What better way to feed my mania than a live-ish blog of the US Open at Pinehurst?

8:00am: Wake up and check out the scores. Stacy Lewis is already out to a blazing start at -2 and it continues with her ending her round at -3. I am kicking myself because in my mind, I would have picked her for the fantasy golf team that I don't have. I just found out about this fantasy league but since we are halfway through the season, I didn't enter. I lost last week picking Kaymer to finish with -8 (his final score was -9) am I doomed to repeat with Stacy Lewis kicking ass and taking names?

11:00am: Still waiting for the ESPN coverage to come on the TV and its clear what the difference is between the men's coverage of the US Open and the coverage of the women. It makes me upset that I can't get the same wall-to-wall coverage of the LPGA tour that the PGA puts out there. I think streaming costs are going down so much that eventually streaming the off-peaks events will become common place (as the PGA has done) but until then, I am refreshing the US Open Leaderboard.

11:17am: Update on Streaming! The head of the LPGA Media answered my question and said it was a rights issue:

@ReGripped RE LIVE Streaming Always a chance ... complicated because of rights issues. I will raise issue again. Thanks! #AskLPGA
— Kraig Kann (@KraigKann) June 19, 2014

That right there is why the LPGA is different/better than the PGA or other sports, their responsiveness to their fans is almost unmatched. 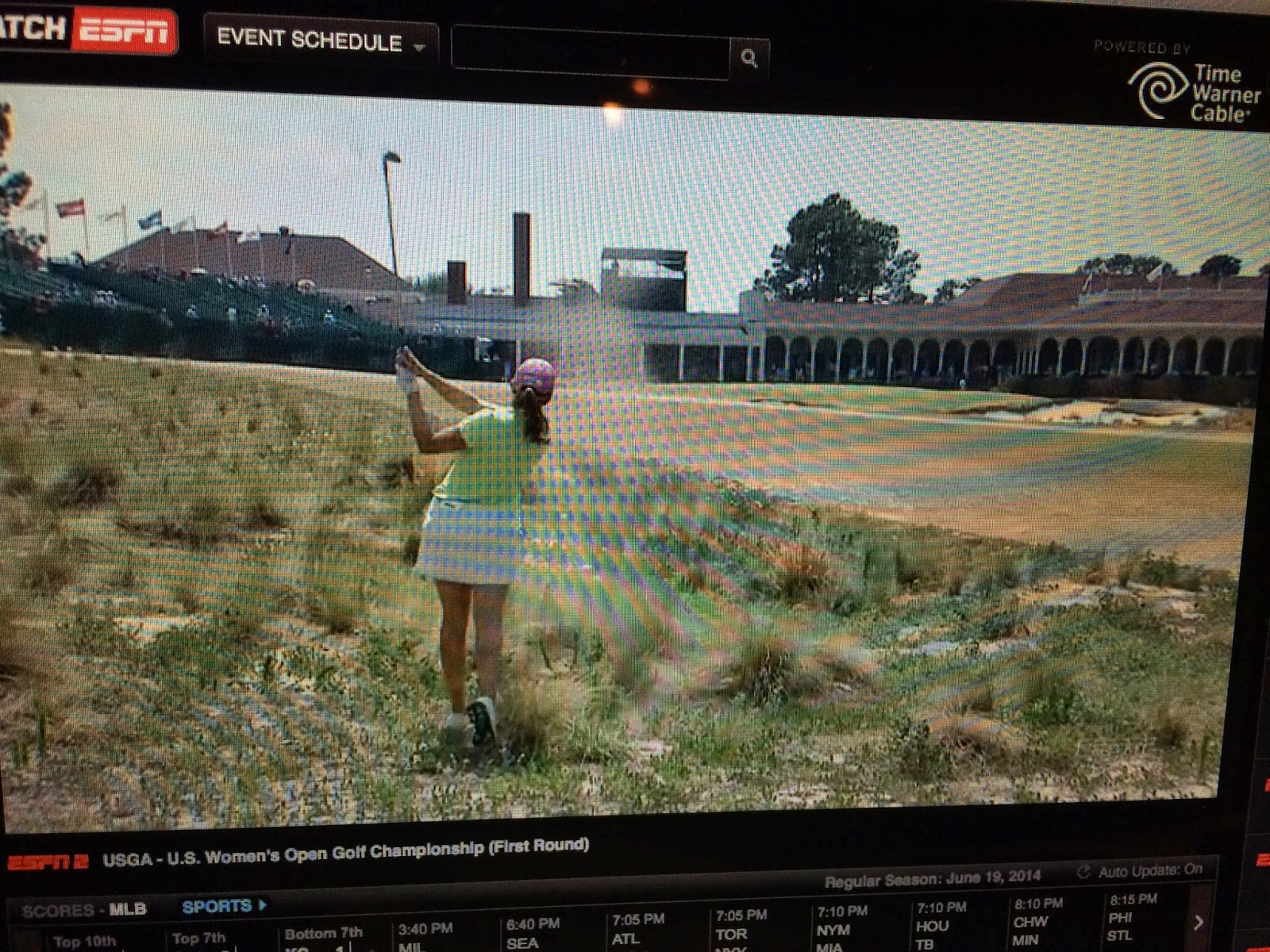 Wie skulls one over the green (and makes an "ugly" 6) and Paula Creamer putts a ball off the green; clearly Pinehurst is showing its teeth. I don't the course ever plays easy from what I hear but once you have been accurate driving and in the fairways, the greens could still mess you up.

1:00pm: A fascinating statistic comes up regarding how well the amatuers are doing at the US Open. 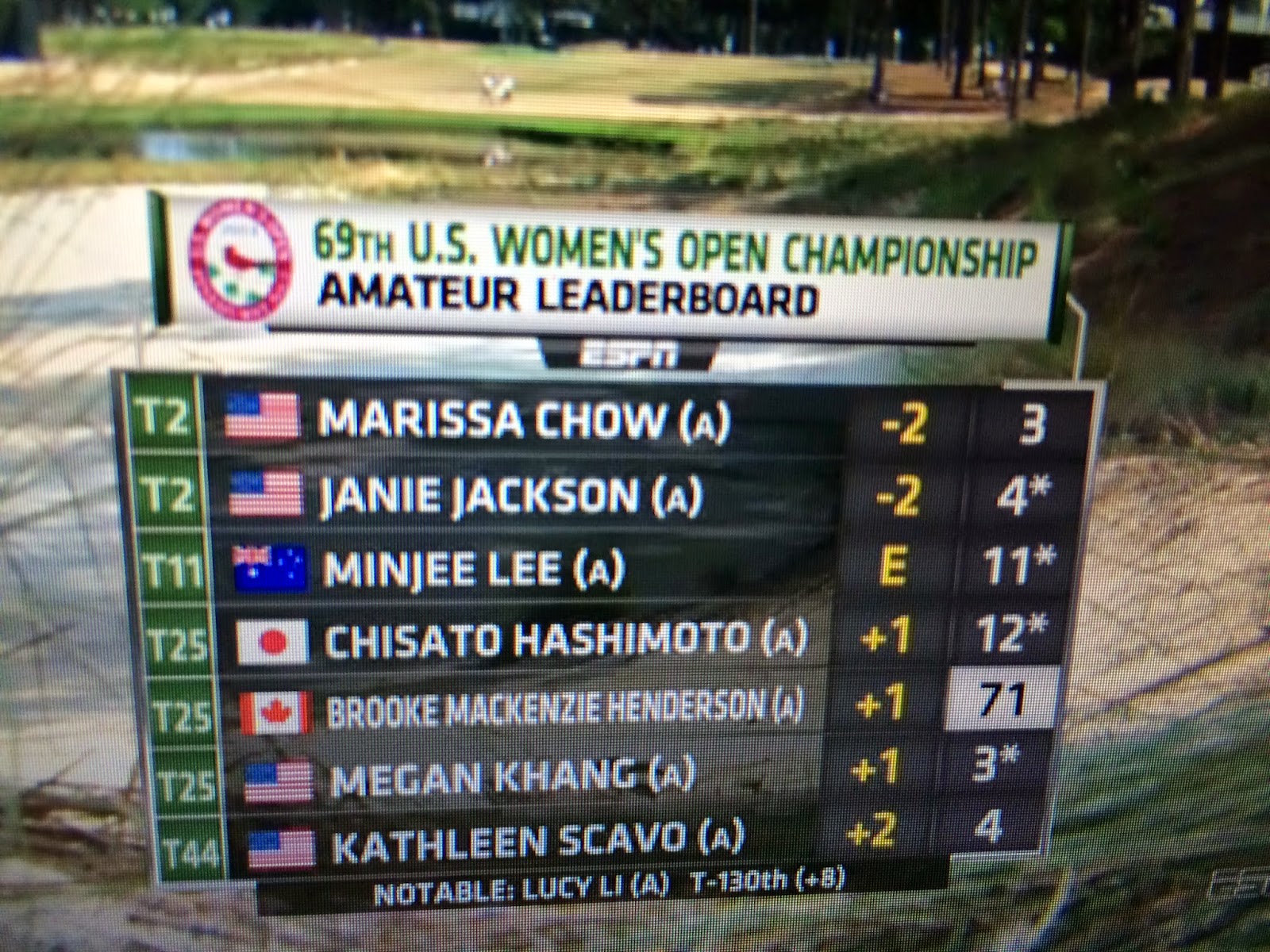 We often think that the pros are, well, professional. That they are lightyears ahead of any other golfer but there is plenty of talent all around the country and world in golf. When I played golf seriously back in the day, I was consistently surprised how many good golfers were at each level I played at. It is clear there is the same depth of talent in the women's game and the fact that so many amateurs are near the top of the leaderboard will make for a very interesting tournament, especially as the pressure gets ratcheted up on the weekend.

1:30pm: It is interesting to see how the course is playing compared the course that the men just competed at. So far hole 9 (a par 3) is playing like it owes someone money since so many shots are coming up close to the stick. It cousin, hole 10 isn't playing much better, what with it being ranked as the easiest hole on the course through the first round so far. Conversely, hole 10 was middle of the pack in terms of toughness for the men. One of the points of holding the men's and women's championships at the same course was the interesting experiment of how would each play the course? So far, it has yet to be seen but it looks like a much more competitive tournament than the one Martin Kaymer ran way with last weekend (I think he still making birdies despite the tournament being over for 4 days).

1:36pm: Wait, wait, wait, there is a golfer with the last name of "Pancake"??? Have I found my new favorite LPGA player?

2:20pm: The youth are on parade here at the US Open. A college amateur (Marissa Chow) was leading the US Open until she blew up on 8 with a double bogey and then another double on 9. I will admit to being in my 30s and I am getting to the point where I am older than the athletes I follow but the LPGA is ridiculous with 11 year olds, 15 year olds and 18-19 year olds out there. So basically, the US Open makes me feel old.

3:20pm: Your current leaders of the open are Stacy Lewis (current No. 1 in the world), Michelle Wie (No. 11 and climbing) and Paula Creamer (13th in da world). the amateurs have fallen away a bit and the pros have taken command. The difference between the pros and amateurs that I have seen this late in the day is that while each is capable of making good shots, the pros don't blow up with double bogeys or worse. They keep the damage of their misses to a minimum and also have the ability to birdie a hole to pick up shots. Me, I am just hoping to keep it on the fairway.

4:00pm: And that wraps up the TV coverage although there are a few golfers still left on the course. Paula gave one back on 9 but is still in the hunt as are a lot of other golfers. One thing you can usually count on in a US Open is that the course is so tough, most scores hover right around par and right now 24 golfers are +1 or better so lots of people are in the hunt. Of course, we will have to see if Stacy pulls away a little bit or comes back to the pack tomorrow!

All images poorly photographed from WatchESPN are their property and their use herein is for commentary and criticism purposes only and no rights are claimed to the copyright thereto.