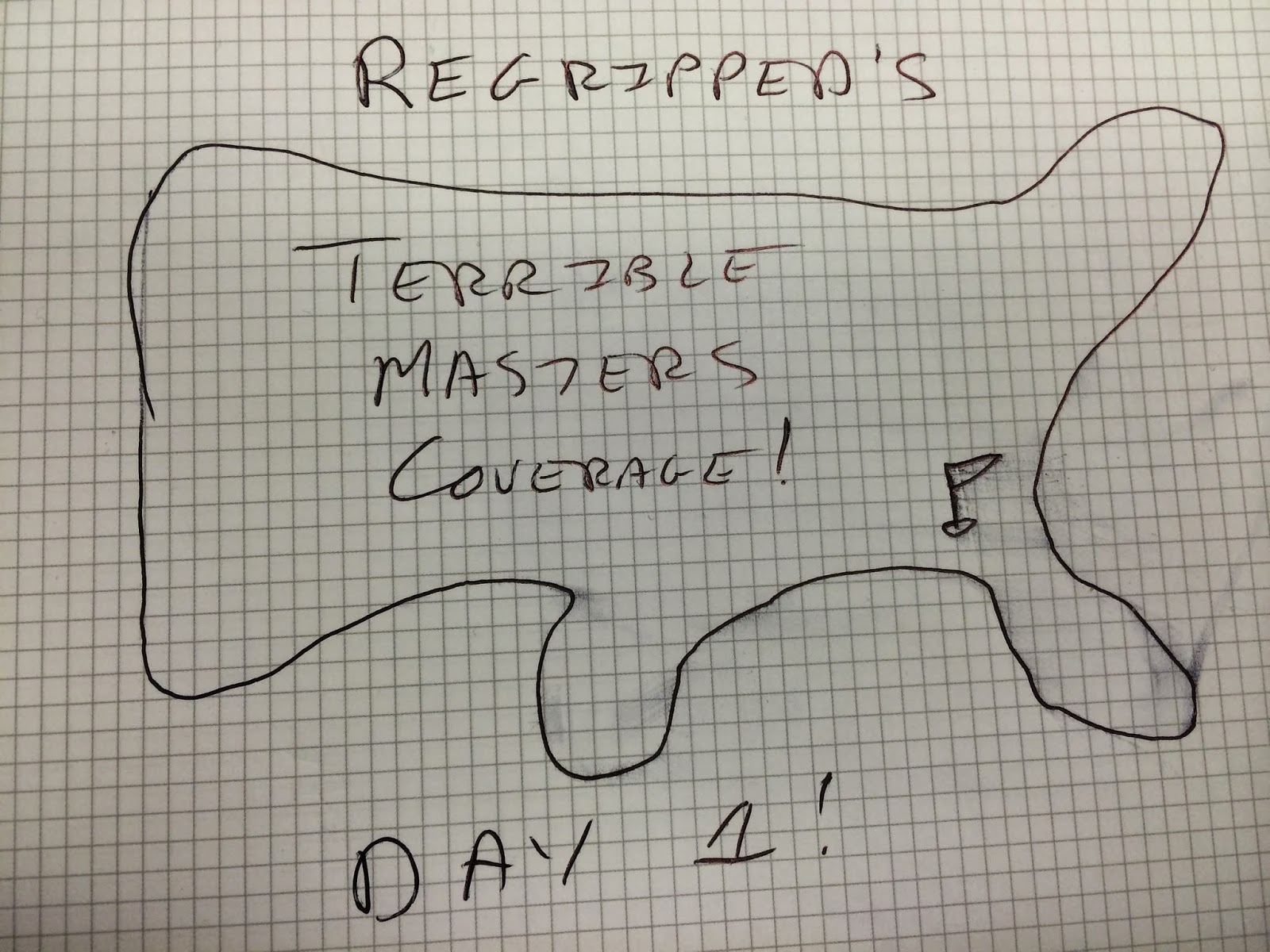 Here is a sorta running diary of my following the Masters on Day 1, enjoy the stream of consciousness and run on sentences!

6:55am: I am up early on Masters Thursday (6:55am PST baby! yeesh do I have a life, not sure) and switch on the ol Golf Channel to see what is shaking. Lots of shots of people on the practice green or on the driving range since we aren't on the official ESPN coverage yet. Most people think golf is boring to watch on TV, I can only imagine what they think about watching people PRACTICE golf on TV.

7:45am: After suffering through watching people practice, suddenly my Masters Live webstream pops up with a live look-in at the famous Amen Corner. 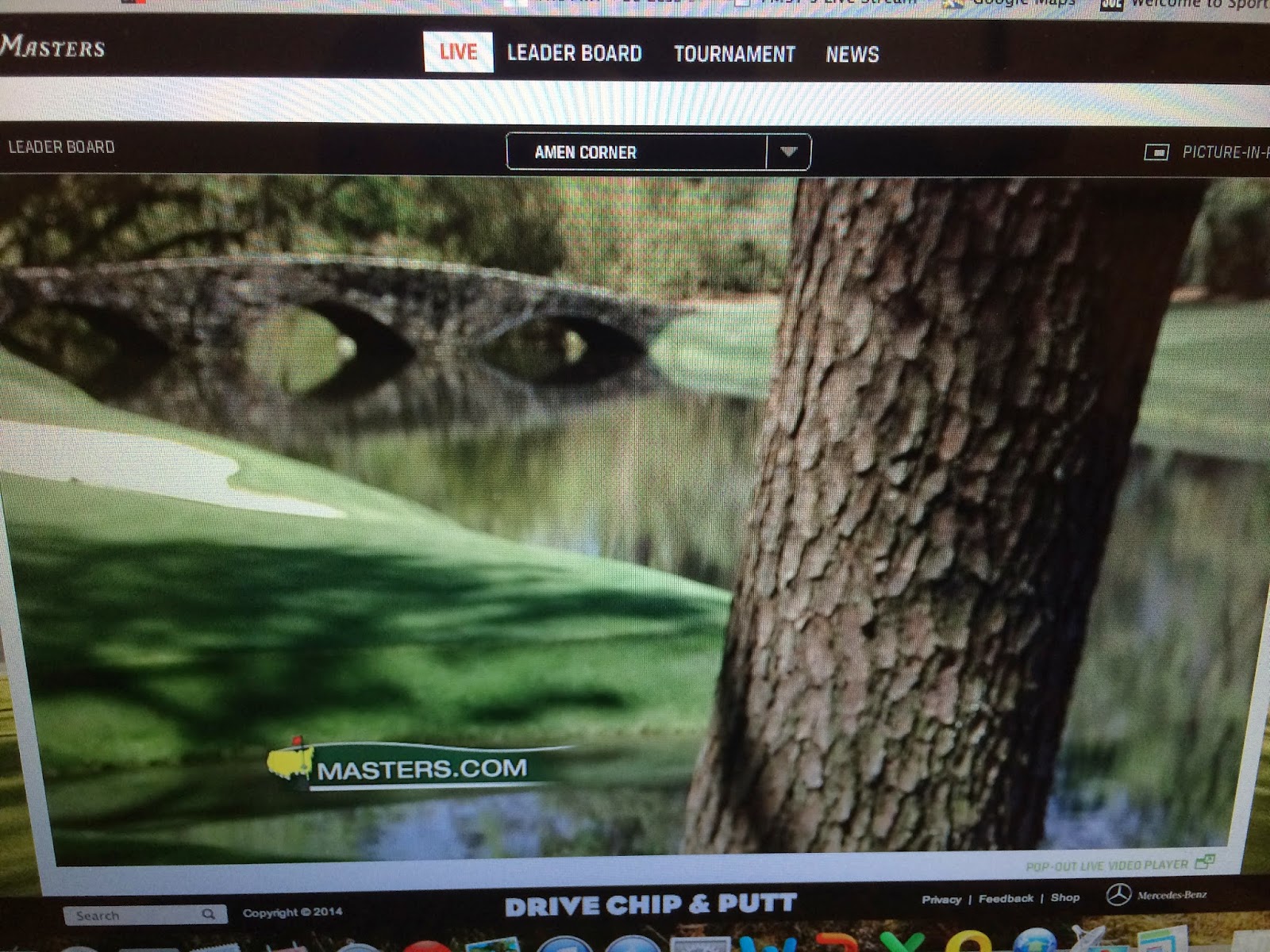 It used to be that you would never see the front 9 of Augusta National, just on highlights and you would see the back 9 when CBS geared up their coverage which, if you think about was a peculiar way to cover a golf tournament. Nowadays we have live streaming, radio coverage and 4 days of TV coverage so every gap is filled. I still haven't decided whether that is a good thing or not (why won't those kids get off my lawn with their rock music?).

7:35am:  In watching the beginning coverage of the Masters, the sounds of nature really bring me back to watching previous Masters. The birds singing, the turtles caring less, the silence despite 50,000 people there. Its like you are watching a live painting of a park when you watch the Masters.

8:30am: Watching nothing but the same 3 holes for 3+ hours straight has me thinking the following thoughts: 1) There is such a thing as "pro shot dispersal" where a lot of these guys will hit within 5 yards of each other on the drives. Most guys face similar second shots.

2) However, the iron play varies wildly. Some guys really lose it right on 13 or overshoot the green on 12 while others are dialed in. 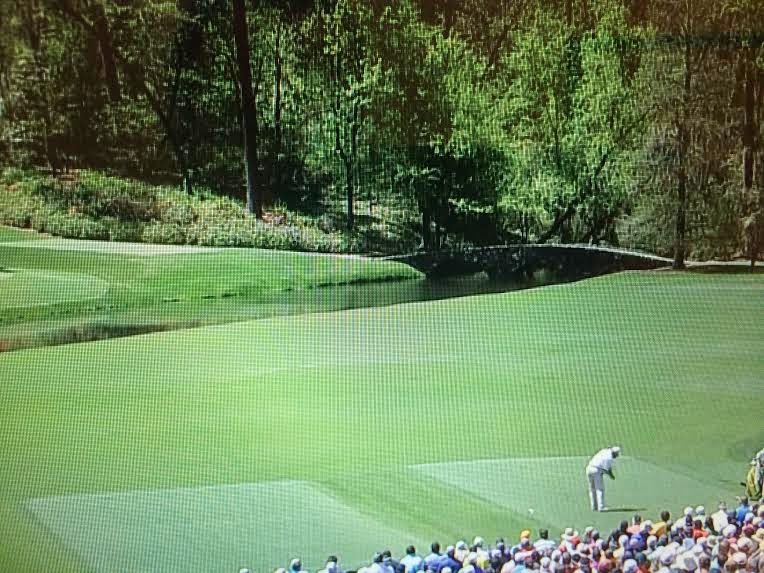 3) Everyone putts well but watching the same 3 holes hour after hour, you gain almost a Groundhog's Day -like omniscience on how the puts will roll from the various parts of the green. 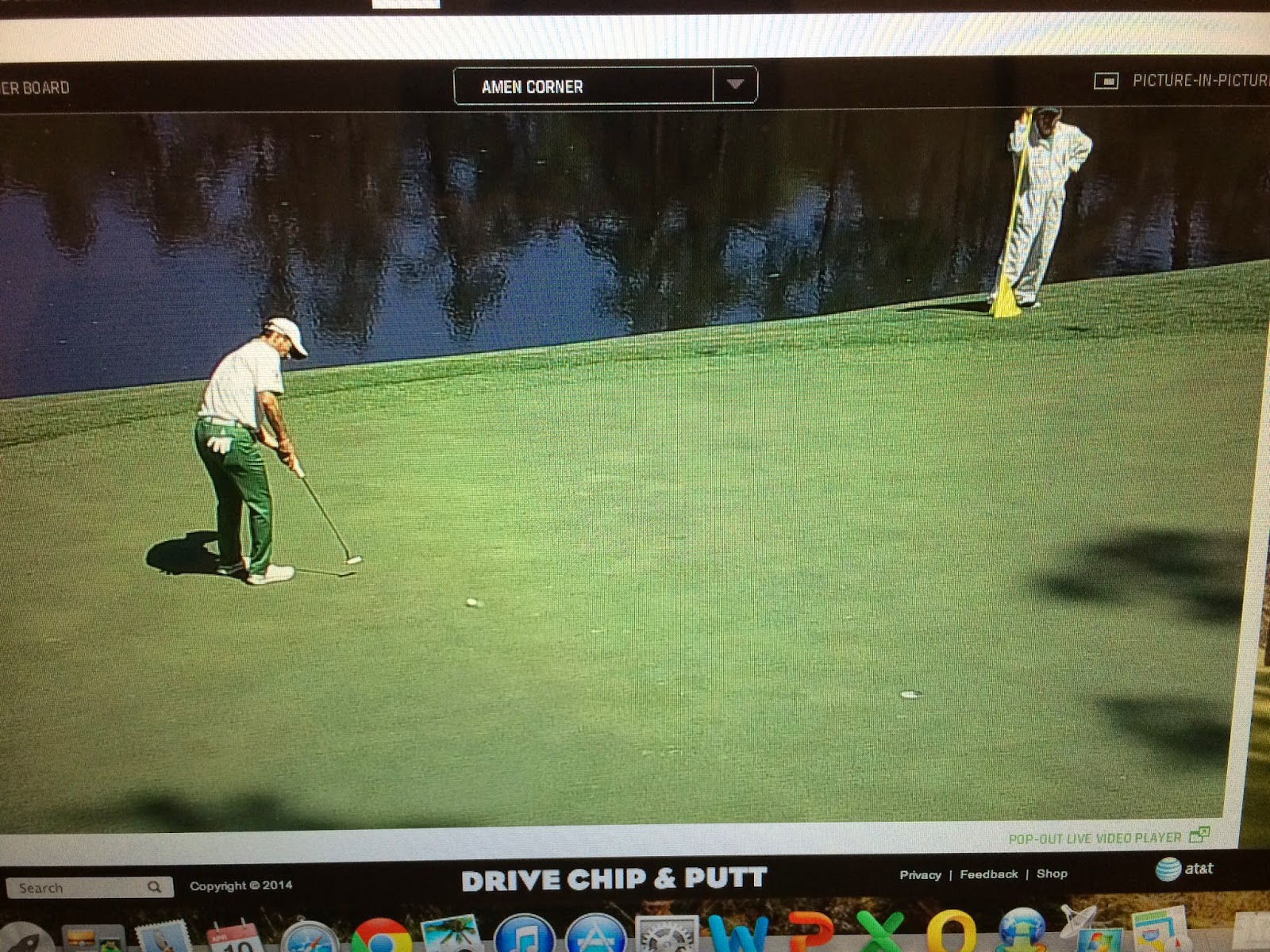 9:23am: If it isn't apparent already from this blog, I am a Fred Couples fan (so much so that I am having a Devil/Angel shoulder conflict over purchasing this bad boy). It is great (and not unexpected) to see him near the top of the leaderboard on Thursday. He always has done well at Augusta (including a 6th place finish in 2010). Hopefully this bodes well for him for the rest of the week.

10:41am: There are so many young golfers at the Masters. Jordan Spieth being all of 20. Also at 20 Matteo Manassero and a whole bunch of 24 year olds. I still feel like a spring chicken at 35 but clearly I am losing some years to these guys if I ever want to make a run at playing at the Masters (first step, playing at my local 9 hole course).

11:30am: Even I got tired of watching the same 3 holes so I switched over to follow the Fowler/Walker/McDowell group. It was great to be able to follow golfers in the traditional sense (on my laptop). The course looks in amazing shape, which given the concerns over the ice storm in Georgia, means the club threw tons of money at it and it shows (in a good way).

12:30ish: Ran some errands and decided to put the Masters App through its paces. I will have a more in-depth review of the App next week but for now, suffice to say it was impressive. Video, pictures and it all didn't crash or asked to take my credit card number "just in case".

That is it! Day 1 of the Masters is in the books. Let's talk about some of the horses of the tournament shall we?

Scott: Big surprise, basically the best golfer in the world, winner at the Masters last year, Adam got off to a -3 start and is prime position to go back-to-back for the first time in a long time.

Snedeker: 2 under, this guy has a ton of game and I really dug him as a person with his recent interview with Feherty. He could definitely take a run at a jacket this weekend.

Spieth: -1, kept himself around all day and with scores not that low (current leader is at -4) he is very much in it. Big things coming from the wee colt.

Headed For The Glue Factory:

Lefty: Fascinating that for a long time it was him or Tiger as the favorites to win any given tournament but this year with Tiger out Lefty was not in the conversation as contending for the jacket. He didn't do so hot today carding a +4.

Rose: Is it just me or is Justin Rose permanently fixed in my mind as a young amateur kicking butt during the 98 British Open? He has gotten much better since then but today with a +4 he did himself no favors.

Moore: +5 sadly. I really like Ryan's game but for whatever reason he couldn't get it going today.

All images poorly photographed from Masters.com are their property and their use herein is for commentary and criticism purposes only and no rights are claimed to the copyright thereto.
Posted by Pete at 4:30 PM